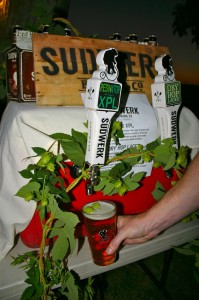 A dozen Sudwerk Brewing Company employees joined farmer Sean McNamara at 7 a.m. on Aug. 22 at Blue Heron Hop Yard in Winters. When the crew finished before noon, they brought the Chinook hops straight to the Davis brewery, creating the freshest possible local beer.

Most beers are flavored with dried or pellet hops, because the delicate fresh hop flowers degrade quickly. Hop cones contain the oils and resins that add the floral aroma and bitterness to beer.

“That’s why we decided on the name, because all of our hands were covered in resin after picking the hops,” said Ryan Fry, co-owner of Sudwerk Brewery.

When these “wet” hops are used, the flavor is tangy but subtle. Although the Resinator has an initial bitterness similar to India Pale Ale, it finishes smooth and refreshing, in Sudwerk’s trademark lager style. Dried Falconers and Summer hops add balance, but it’s the copious amounts of wet Chinook hops that provide a “farm-fresh piney citrus aromatic experience,” Fry said.

Before Prohibition in 1920, the Sacramento region was one of the country’s hops-growing capitals. After the dry spell, few growers returned to the crop. Today, most craft beer features hops from the Pacific Northwest. But the farm-to-fork movement is creating demand for local ingredients. While Sacramento breweries have made some “hyper-local” beers, Resinator is the first in Davis and Yolo County.

With just 20 kegs made and about 15 remaining, beer lovers are savoring this special, fresh brew. For beer aficionados, the Resinator has 5.6 percent alcohol by volume and 56 International Bittering Units, making it one of the “hoppiest” beers the Davis brewery has produced.

Resinator XPL is available on tap at the Sudwerk Dock Store, and a handful of pubs in the Sacramento area, co-owner Trent Yackzan said. The Dock, an informal, family-friendly taproom, serves pints and fills growlers. Patrons enter through a roll-up metal door at 2001 Second St., Davis, Calif. It’s next to the Sudwerk restaurant, which has been under separate ownership since 2006. Hours are 6 to 7:30 p.m. Tuesdays, and 4 to 8 p.m. Thursdays through Saturdays.