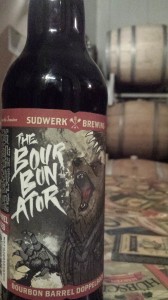 The dark, potent lager is a barrel-aged version of its winter seasonal, the Doppel Bock Ultimator. But after brewing, instead of going into cold storage tanks for lagering, it’s stored in Kentucky oak bourbon barrels.

“It’s not about the bourbon — it’s more a component of the beer,” said resident barrel master Phil Emerson.

The flavor hints of vanilla, coconut, chocolate and toffee come from the Doppel Bock and the barrel, without adding spices or flavorings.

“It’s a beer for sharing,” and is a great gift for a craft beer lover or party host, he said. Unlike the limited shelf life of most beers, Bourbonator will age well. It weighs in at 9 percent ABV and 40 IBU.

“This brew definitely fits with the new brewery mission of redefining the American Lager. Like everything we do, it’s balanced, especially for as big of a beer as it is.”

What sets Bourbonator apart from other bourbon-barrel aged beers, Emerson said, is that it’s a lager, not an ale. “There are not a lot of bourbon-aged lagers, and not many breweries make a Doppel Bock to begin with.”

The Bourbonator comes in 22-ounce bottles in a very limited release. Sacramento area consumers can find it at Nugget Markets, Whole Foods, The Sudwerk Dock Store, and a handful of other select stores. It also will be available for sale and on tap at select accounts around the Sacramento, San Diego and San Francisco area. The beer is the final release of the 2014 Brewers Cut Series.