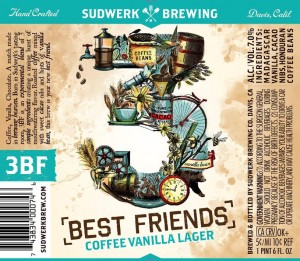 The balanced, dark lager gets its name from the ideal infusion of three ingredients: locally roasted coffee from the Pepper Peddler, Madagascan vanilla beans and cacao nibs. Sudwerk brewed a chocolate malt lager, the Dunkel, as its base beer. This brew is the second release in a series of Experimental West Coast Lagers, and is part of Sudwerk’s quest to redefine the American lager. The brew contains 7.0% ABV and 20 IBU.

3 Best Friends has a fresh, bright, roasted coffee aroma with a rich, toasty cocoa beginning. Its light mouthfeel finishes smooth, with a hint of vanilla. It has all of the chocolate and roasty flavors of a stout or porter, with the smooth, fast finish of a lager.

A limited-release, 3 Best Friends will be available starting Feb. 13, in 22-ounce bottles and on draft the brewery’s taproom, The Dock Store, 2001 Second St., Davis. It will also be on draft at several events and select accounts throughout Sacramento and Davis during Sacramento Beer Week, Feb. 22 through March 9.