BOULDER, CO – The mood at the Town and Country Resort in San Diego, Calif. was boisterous and upbeat. In the parlance of the business community, one would say “bullish,” though those assembled for the 33rd annual National Homebrewers Conference might not choose such a formal word to describe the gathering. Either way, the event’s growth indicates that the homebrewing hobby is increasingly popular.

Once again, the National Homebrewers Conference sold out well in advance, and this year, the American Homebrewers Association (AHA) welcomed 2,000 attendees to San Diego. The growth in attendance over 2010 was close to 50 percent, making this the largest homebrewers conference ever. 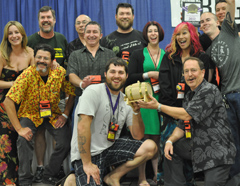 Similarly, the National Homebrew Competition filled up early. Every first round judging center was at capacity, which added up to nearly 7,000 entries, making this the largest beer competition in the world. The competition winners were recognized at the Saturday night Grand Banquet, which concluded the National Homebrewers Conference. The AHA also hosted distinguished guests at the banquet, including California Assemblyman Nathan Fletcher (AD-75) and U.S. Representative Brian Bilbray (CA-50), both strong supporters of craft brewing and homebrewing.

Naturally, given the surge in attendees at this year’s event, the banquet was destined to reach new heights. Sure enough, “The Homebrew Chef” Sean Paxton was faced with the challenge of creating an elegant beer dinner for a record-breaking 1,500 guests. Paxton delivered with gusto, serving three courses, featuring the flavors of Southern California and Mexico. The main course was a Chipotle Ale brined chicken in a Oaxacan Chocolate Stout mole, served on a bed of rice pilaf infused with Rogue Brewery’s Dead Guy Ale, paired with Rogues’ Mocha Porter. Rogue was the official Banquet sponsor.

Rogue Brewery’s beer was featured during the banquet, and its brewmaster, John Maier was also presented with the AHA Governing Committee Recognition Award. A longtime homebrewer and icon of the craft brewing world, the soft-spoken Maier was clearly emotional and appreciative as he accepted the award before hundreds of homebrewers.

The AHA extends its heartfelt thanks to the 2011 National Homebrewers Conference local organizers, without whom the event would not be possible.

The National Homebrewers Conference also recognizes the many sponsors that supported the event in numerous capacities. Their dedication to the homebrewing hobby is admirable, as many are long-time supporters of the event.

Next year’s event will head north to Seattle, Wash., another region well-known for a thriving craft brewing scene. Stay tuned to AHAConference.org for details and updates.