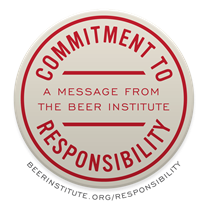 WASHINGTON, DC — A landmark research study found alcohol use by teens has dropped dramatically over the last two decades — particularly among the youngest teens. America’s brewers and beer importers lauded the findings of the University of Michigan’s Monitoring the Future study as the result of greater awareness, partnership and outreach by industry, educators and parents.

The Monitoring the Future (MTF) study is an annual, government-funded survey of 8th, 10th, and 12th graders’ drug and alcohol use. The MTF’s newest report stated: “Alcohol use and binge drinking are continuing their long term declines in 2013, reaching their lowest points in the history of the study.”

“Brewers and beer importers are committed to responsibility. We work through hundreds of state- and community-level programs to make sure beer stays out of the hands of underage Americans,” said Beer Institute Vice President Chris Thorne. “The University of Michigan study is great news. But we know there is more to do. We are committed to our partners in schools, law enforcement and communities across the country to make even greater strides toward reducing underage drinking.”

Furthermore, the prevalence of recent binge drinking dropped this year for 10th and 12th graders. Disapproval of binge drinking continues a gradual increase in the upper grades; and perceived availability for alcohol continues longer-term declines, which are sharpest in the lower grades.

“As a father myself, I know the importance of talking with my kids about alcohol use. In fact, research shows that parents have the most influence on teen drinking decisions,” added Thorne. “We encourage you to talk with your kids about making safe decisions about alcohol. And hopefully we will continue to see these record declines for years to come.”

Beer Institute members have invested in hundreds of programs and initiatives to support public safety, education and prevention, including those aimed at reducing underage drinking. Specifically, brewers and importers work with a diverse alliance of partners to produce and promote materials to help parents talk with teens, discourage alcohol sales to minors, and promote responsibility on college campuses. Beer Institute members are also proud supporters of the Federal Trade Commission’s ‘We Don’t Serve Teens’ effort.

Monitoring the Future is an ongoing study of the behaviors, attitudes, and values of American secondary school students, college students, and young adults. Each year, a total of approximately 50,000 8th, 10th and 12th grade students are surveyed (12th graders since 1975, and 8th and 10th graders since 1991). The Monitoring the Future Study has been funded under a series of investigator-initiated competing research grants from the National Institute on Drug Abuse, a part of the National Institutes of Health. MTF is conducted at the Survey Research Center in the Institute for Social Research at the University of Michigan.

The Beer Institute, established in 1986, is the national trade association for the brewing industry, representing both large and small brewers, as well as importers and industry suppliers. The Institute is committed to the development of sound public policy and to the values of civic duty and personal responsibility: www.BeerInstitute.org. Connect with us @BeerInstitute and on Facebook.