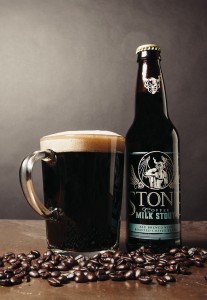 Originally named Gallagher’s After Dinner Stout, the recipe was formulated and brewed on the 10-barrel pilot system at Stone Brewing World Bistro & Gardens — Liberty Station as a one-off, limited-release offering. A passionate and competitive homebrewer, Gallagher chose to revisit one of his medal-winning recipes for a milk stout with coffee beans when given the opportunity to brew at Liberty Station with Brewing Manager Kris Ketcham. The beer was an instant hit with Team Stone, Stone Brewmaster Mitch Steele and company Co-founders Greg Koch and Steve Wagner.

“Brian did a wonderful job developing this recipe and was able to artfully overcome the challenge of brewing a low-alcohol beer without it tasting too thin or watery,” explains Steele. “Because of the positive response from Team Stone and those lucky enough to taste the small-batch brew, we decided to brew it on our 120-barrel system and make it more widely available for craft beer enthusiasts across the country.”

To produce a full-bodied and silky mouth-feel, lactose was incorporated, creating a creamy sweetness that balances with the mild coffee flavors made possible by adding whole coffee beans from San Diego-based artisanal roaster Ryan Bros. Coffee. Mild ale malt was used as a base grain to help create a rich, roasty character, while other specialty grains contribute cocoa, licorice and subdued coffee flavors. Magnum hops bring a clean bitterness, brilliantly contrasting with the beer’s malt-forward qualities. Together, the ingredients make for an easy-drinking beer that is robust yet smooth.

“I was thrilled to find out that my ‘little beer’ would go on to be part of the Stone lineup and be distributed nationally,” said Gallagher. “To make this beer stand out from others, I added coffee beans at a very early stage in the brewing process, which helped bring out the roast character from the coffee, while eliminating bitter acidity and astringency.”

On the beer’s dedicated webpage, the company is sharing recipes for culinary enthusiasts to create and pair with the beer. Fans are also encouraged to explore and prepare their own dishes to pair with Stone Coffee Milk Stout, then share their favorites by tweeting and posting photos using the hashtag #PairedWith on Twitter, Facebook, Instagram, Google+, Pinterest and the Stone Coffee Milk Stout webpage.

Stone Coffee Milk Stout will only be available during summer and fall. To fully relish the subtle touch of coffee flavor, the beer should be enjoyed within 120 days of its kegging or bottling date, which can be found on the shoulder of the bottle.

Aroma: Dark-roasted malts give off coffee and cocoa, with hints of smokiness.

Taste: Pronounced coffee and dark-roasted malt flavors that contain hints of cocoa and licorice, and a lot of fruit esters from the fermentation. This is a very malty beer.

Palate: Light-bodied and smooth, with a semisweet but also slightly dry finish.

Overall: Stone brewer Brian Gallagher was spending some time working on our 10-barrel brewhouse at Stone Brewing World Bistro & Gardens — Liberty Station when he came up with this beer recipe and brewed it with Brewing Manager Kris Ketcham. His creation was a hit with everyone who tried it, and I’m excited that we are able to release this to our fans nationwide. Several unique things about this formulation make the beer special, including the addition of San Diego coffee roaster Ryan Bros.’ coffee beans in the mash. We also use British mild ale malt as the base malt and milk sugar, which brewer’s yeast does not ferment. These components add some body and a touch of sweetness to the resulting beer. At only 4.2 percent ABV, some might expect this beer to be thin, but that’s far from the truth—it is a smooth and satisfying beer.

Founded by Greg Koch and Steve Wagner in 1996, San Diego-based Stone Brewing Co. is the 10th largest craft brewer in the United States. Stone has been listed on the Inc. 500 | 5000 Fastest Growing Private Companies list nine times, and has been called the “All-time Top Brewery on Planet Earth” by BeerAdvocate magazine twice. The multi-faceted company will be the first American craft brewer to independently own and operate facilities in Berlin, Germany and also has plans to open operations east of the Mississippi. Known for its bold, flavorful and largely hop-centric beers, Stone has earned a reputation for brewing outstanding, unique beers while maintaining an unwavering commitment to sustainability, business ethics, philanthropy and the art of brewing. For more information on Stone Brewing Co., please visit stonebrewing.com or the company’s social media sites: Twitter, Facebook, Instagram, Google+, YouTube, Pinterest and The Stone Blog.