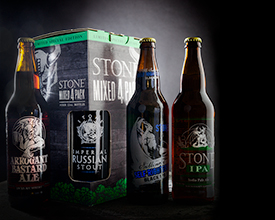 Starting today, fans in select markets may purchase the Stone Mixed 4 Pack, featuring 2014 Stone Imperial Russian Stout, Stone IPA, Stone Sublimely Self-Righteous Black IPA and Arrogant Bastard Ale. 2014 Stone Imperial Russian Stout will be included in the Stone Mixed 4 Pack and made available an entire week prior to its national release. This is the first time ever that Stone has pre-released a special release beer to fans. This set of 22-ounce beers makes up the inaugural version of the Stone Mixed 4 Pack; future editions will be introduced on a quarterly basis and include one special-release beer in addition to three year-round releases.

“We know our fans have a variety of tastes and might want to enjoy a sampling of styles instead of committing to a single case offering,” said Todd Karnig, Stone Vice President of Sales. “We had this in mind when choosing the beers that would make up the Stone Mixed 4 Pack and think it will be a great choice for people who want to mix things up.”

The Stone Mixed 4 Pack is the ideal choice for those seeking a classic Stone favorite or revisiting a beer they haven’t enjoyed in a while, or for the ultimate craft beer geek who relishes the opportunity to try a special-release Stone beer one week before its national release date.