ESCONDIDO, CA – Stone Enjoy By 09.21.12 IPA is devastatingly fresh. Yes, devastatingly. Why? It’s specifically brewed NOT to last. Imagine a beer that MUST be consumed by the date prominently featured on the front in order to preserve its hoppy goodness. Well Stone fans, imagine no more.

Stone Brewing Co. is unleashing said beer in Chicago, New Jersey and Southern California, enter “Stone Enjoy By 09.21.12 IPA.” This amazingly fresh double IPA is loaded with hops—11 different varieties to be exact, giving the beer a massive hop profile and a balanced palate of bitterness and dryness.

“At Stone we take freshness seriously, so much so that we laser-etch the Enjoy By date on each bottle,” Greg Koch, Stone Brewing Co. CEO and co-founder stated. “However, Stone Enjoy By IPA is a project that takes freshness to an entirely new level.”

The “Enjoy By” date printed on each bottle is reflective of a 35-day package-to-drink cycle, meaning to fully maximize the beer’s hop glory, it must be consumed before or by the end of the 35-day cycle. And Stone is making sure it will be; on September 22, if any beer remains on the shelf it will be immediately removed. This is an unprecedented feat of coordination by StoneÔÇªbut this beer is worth it. How can you locate one of these awesomely fresh bottles? Visit www.stonebrewing.com/enjoyby/ and use the interactive map to find exactly which retailers, restaurants and bars are carrying the beer, either in bottles or on draft. If it looks like Stone Enjoy By 09.21.12 IPA isn’t at a location near you don’t fret, we will unleash this beer to other markets in the future!

Since Stone Enjoy By 09.21.12 IPA is a very limited release, Stone Brewing Co. will measure “buzz” for the beer through the company’s social media platforms: Facebook, Twitter, Instagram (StoneBrewingCo) and the Enjoy By IPA website. Fans of the beer will be able to express their desire to get Stone Enjoy By IPA back in their city by using any or all of these. Hopheads are encouraged to comment, tweet, Instagram, and share with fellow hop enthusiasts in real time, all in one placeÔÇª.ohh, did we mention go to www.stonebrewing.com/enjoyby/?

Stone Enjoy By 09.21.12 IPA social media mavens are encouraged to use the following hashtags on Twitter and Instagram to plead for the beer’s return to their city, or just preach the sheer awesomeness of this IPA: 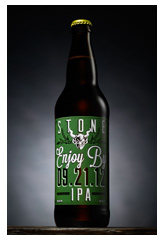 Aroma: Intense dank hoppiness, resin, peaches, and hints of tropical fruit are all evident in the aroma.

Taste: Smooth malt upfront, quickly dissipating into a massive onslaught of hops. The dankness and peach come through strongly.

Palate: Smooth, hints of alcohol, and a perfect balance of bitterness and dryness on the back end.

Overall: We took the opportunity with this beer to use several interesting techniques we’ve learned during our many years of brewing great Double IPAs. The result is an intense dry beer with very little malt sweetness, but with plenty of malt flavor to provide a background to the enormous…or shall I say “ginormous” hop character.

Hopping, as might be expected, was over the top. First, the brew was mash-hopped with Calypso, a beautiful fruity hop that we also used in our Stone 16th Anniversary IPA, after which we kettle-hopped with a very small dose of Super Galena hop extract for bittering. Then, using a technique known in homebrew circles as “hop bursting,” we loaded up very heavily on the flavor hops at the end of the boil and in the whirlpool. Simcoe, Delta, Target and Amarillo were used in the late kettle hop. Motueka, Citra, and Cascade were used for the whirlpool hop. As you can clearly tell, this beer was super hoppy even before we dry-hopped it, but then we went for it…dry-hopping with one pound per barrel EACH of New Zealand Nelson Sauvin and Australian Galaxy. Drink extra-super-dank-and-tasty Stone Enjoy By 09.21.12 IPA well before its 35-day shelf life to maximize the pungent glory that this beautiful, intense hop profile provides.

Stone Brewing Co. was founded in 1996 by Steve Wagner and Greg Koch in North County San Diego. It is the 11th largest craft brewery in the United States and has been named “All-Time Top Brewery on Planet Earth” by BeerAdvocate magazine – TWICE! The brewery recently announced more than $50 million in expansion plans that includes Stone Packaging Hall, Stone World Bistro & Gardens — Liberty Station, and the future Stone Hotel among other lofty ventures. For more information, please visit www.stonebrewing.com, follow on Twitter www.twitter.com/StoneBrewingCo or “like” on Facebook www.facebook.com/StoneBrewingCo.