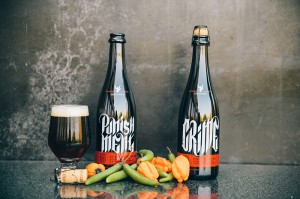 ESCONDIDO, CA — It takes a certain kind of person to drink a beer infused with the world’s boldest, fiery chilies — they are called masochists. Only those at the center of a Venn diagram combining pain-seeking individuals, the most audacious beer enthusiasts, and avid chile lovers have the palate stamina and discerning taste to handle such a beer. If you’re not anywhere in this Venn diagram, you should heed this as a warning and stay far, far away (especially those who have a penchant for whimpering and whining in online forums). However, for those who dare sample two insanely intense beers: You’re in for something specialÔÇªand both unforgettably and unforgivingly spicy.

This chapter of the #LiquidArrogance story started back in 2010, when Stone Brewing Co. CEO and Co-founder Greg Koch decided to ruin a beautiful bourbon barrel-full of Lukcy Basartd Ale by dumping a variety of chile peppers from his personal back-yard garden into the beer. That was a criminal act. Concurrently, Greg annihilated another delicious beer by adding more of his estate-grown chile peppers into an oak barrel-aged batch of Double Bastard Ale. As a result of the elevated alcohol level, there was an increased transference of pain-inducing capsicum into the beer. It was punishingly hot. With these discoveries, the beers were naturally named Crime and Punishment. Since these beers are near and dear to Greg’s heart — and to the tiny fraction of the populace that fit in the aforementioned Venn diagram — the beers were re-brewed this year and, thanks to the increased capacity of a new 500ml cork-finished bottling line, are being released nationally for the first time today.

With the release of these two brutal behemoths, there have been rumors circulating that one or two international human rights advocacy groups are organizing protests against Stone Brewing for engaging in “cruel and unusual” punishment. However, these reports could not be immediately verified at press time.

Any that dare to approach the beers should do so with heightened awareness and a preponderance of extreme caution.

Both beers are ready to drink now, or may be properly cellared for months or years. When to open the bottles depends mostly on the procrastination level of the imbiber.

This is the first time that Stone has released beers from their limited Stone Quingenti Millilitre Series for national distribution. Previously, they were only available at special events and Stone Company Stores in Southern California. These releases also mark the unveiling of Stone’s barrel-aging program, which the beer company has been ramping up significantly since first barrel aging its beers in 1996. It’s no surprise that Stone has been barrel aging beers, but to what extent has heretofore been largely kept quiet. But no longer, as someone at Stone is evidently a bit of a blabbermouth. To see who that “someone” is, click here.

With a new facility dedicated to the aging and bottling of these rarities, the beers may not actually be so rare in coming months. With more than 1,300 barrels, ranging from bourbon to wine, brandy to Scotch whisky and more, the company has plans to release future Stone Quingenti Millilitre Series bottles nationwide.

“Expanding our barrel-aging program to include national distribution is something we’ve been working towards for many years,” said Stone Brewmaster Mitch Steele. “Now that we have the ability to produce more of the Stone Quingenti Millilitre Series due to our new aged and bottling facility, our fans should expect to see many new barrel-aged flavor combinations as well as some re-brews of favorites we’ve released in the past.”

“Barrel aging opens up a whole new spectrum of possible flavor combinations when it comes to beers,” said Stone Research and Small Batch Manager Steve Gonzalez. “You get some flavor from what was in the barrel before, whether wine or spirits, and then you get the wood flavors as well. Experimenting with various flavor combinations from the beers and the barrels is really intriguing, and I’m excited to share what we’ve been working on for years with our fans.”