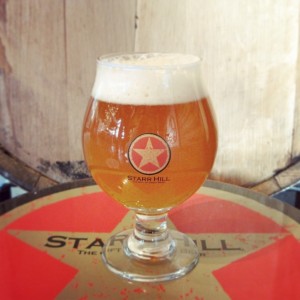 CHARLOTTESVILLE, VA—Starr Hill Brewery is ringing in the New Year with the launch of their limited-release Debut Series of 2015 and the introduction of its first beer, a Belgian Tripel.

“We’ve had tremendous success recently with our limited-release beers, such as the All Access Series, where we’ve been able to experiment with an extensive array of beer styles,” said Robbie O’Cain, Manager of Brewery Operations. “The Debut Series is another opportunity for the Starr Hill team to get creative with the brewing process, broaden our knowledge of new and established beer styles, and showcase our ability to brew excellent beers.”

The Debut Series features six exciting styles of beer that will be released throughout 2015. These beers will be available exclusively on draft at select retailers throughout Starr Hill’s distribution footprint. Each new addition to the series will be released every other month, starting with the Belgian Tripel in January.

Debut #1: Tripel is Starr Hill’s own take on the classic ale made famous by the Trappist breweries in Belgium. Brewed with crushed coriander, fruit and citrus notes compliment the spicy yeast character and create a deep and complex flavor. At 9.5% alcohol by volume, the Tripel is incredibly well balanced with the perfect touch sweetness as well as a slight bitterness from US Saaz hops.