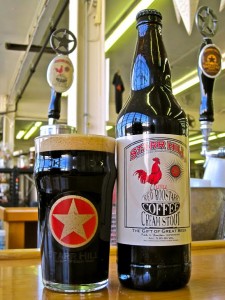 CHARLOTTESVILLE, VA—Starr Hill Brewery is creating a buzz this month with their Little Red RooStarr Coffee Cream Stout, which has recently returned to the market. This beer first debuted in March 2013 as the part of Starr Hill’s All Access limited release lineup. Starr Hill Founder and Master Brewer Mark Thompson and Red Rooster Coffee Roaster owner Haden Polseno-Hensley saw synergy between their companies, and a stout was born.

“Little Red RooStarr Coffee Cream Stout is the perfect example of the kind of collaboration that makes this industry so rewarding. We’re thrilled to be able to bring this beer back to our thirsty fans for the second year in a row,” said Thompson.

Starr Hill’s Little Red RooStarr Coffee Cream Stout is a full-bodied milk stout at 5.8% alcohol by volume and brewed with a special blend of coffee from Red Rooster Coffee Roasters in Floyd, Virginia. Complex malt sweetness, chocolate and caramel notes come from five different malts, creating a robust stout base. The addition of coffee adds nearly all roasted character and heady aromatics, such as cocoa, macadamia nuts and burnt caramel.

“We use a blend of coffee that Haden specifically roasted for this beer, and Starr Hill’s Stout Blend became so popular, Red Rooster now sells it as a standalone brand. It feels awesome not only to make this amazing beer, but also to inspire a new brand for Red Rooster. We had a great time and a lot of laughs making all that coffee to dose into Little Red RooStarr,” said Robbie O’Cain, Starr Hill’s Quality Assurance Manager.

Little Red RooStarr is only available for a limited time—through April—in 22-ounce bottles and kegs (1/6 and 1/2 barrels) across Starr Hill’s entire distribution footprint.

Starr Hill Brewery was founded in 1999 by Mark Thompson and Kristin Dolan in Charlottesville, Virginia. Starr Hill is one of the most award-winning craft breweries on the East Coast, having won 20 medals from Great American Beer Festival, World Beer Cup and Great British Beer Festival since its founding. The beer is distributed in ten states, including Virginia, Delaware, Georgia, Maryland, New Jersey, North Carolina, Pennsylvania, South Carolina, Tennessee, and Washington D.C.