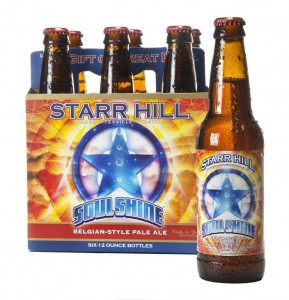 CHARLOTTESVILLE, VA— Starr Hill Brewery, one of the most award-winning craft breweries on the East Coast, is kicking off the warmer months with the introduction of its new summer seasonal beer, Soul Shine Belgian-Style Pale Ale.

“We’ve had great success with our seasonal beers over the last couple of years, and we hope that Soul Shine will be no different. Soul Shine is a full-flavored yet light-bodied beer that has a big citrus hop aroma. The name and label for Soul Shine reflect the culture of our brand and our connection to music, while also expanding upon our growing lineup of pale ales,” said Mark Thompson, Starr Hill’s Founder and Master Brewer.

Soul Shine is a Belgian-style pale ale with an American twist. In addition to its 5.2% alcohol by volume, Soul Shine is generously hopped with a blend of American hops, including Falconer’s Flight, Cascade, and Simcoe, to give it a distinct aroma of citrus and tropical fruit. This light-bodied beer has a crisp palate and moderate bitterness with a subtle spicy finish from the Belgian yeast.

“It took many months of research, development, and securing the desired hops necessary to make this ‘Americanized’ Belgian pale ale. We were very excited to get our hands on these special hops and think our fans will love how they combine with the spicy and fruity yeast character from our Belgian yeast strain,” said Robbie O’Cain, Starr Hill’s Manager of Brewery Operations. “I am really looking forward to sitting on the dock at a lake or hanging in the crowd at a music festival drinking a Soul Shine this summer.”

Soul Shine Belgian-Style Pale Ale will be available at retail beginning April 1 in six-packs (12-ounce bottles) and kegs (1/6 and 1/2 barrels) through August. It will then be replaced by Boxcarr Pumpkin Porter, Starr Hill’s fall seasonal beer.

Soul Shine will be supported with a new social media campaign called “Let Your Soul Shine.” As part of the campaign, consumers will be prompted to share the different ways they let their personalities shine through in their daily lives. Consumers can submit videos or posts via Starr Hill’s Facebook, Twitter and Instagram pages with the hashtag #LetYourSoulShine.

Starr Hill Brewery was founded in 1999 by Mark Thompson and Kristin Dolan in Charlottesville, Virginia. Starr Hill is one of the most award-winning craft breweries on the East Coast, having won 20 Great American Beer Festival, World Beer Cup and Great British Beer Festival medals since its founding. The beer is distributed in ten states, including Virginia, Delaware, Georgia, Maryland, New Jersey, North Carolina, Pennsylvania, South Carolina, Tennessee, and Washington D.C.