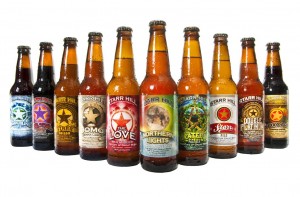 Starr Hill will initially launch in both Georgia markets with a limited draft-only portfolio in early 2014, leading with their flagship Northern Lights IPA, the new and highly popular Grateful Pale Ale, and The Love, a classic Bavarian wheat beer. Starr Hill will also offer the Georgia market its high-end, limited All Access draft lineup, showcasing such brands as Whiter Shade of Pale Ale (White IPA) and Little Red Roostarr Coffee Cream Stout. Taco Mac Sports Grill restaurants will feature Starr Hill as its Beer of the Month for April.

After an initial 60-day draft-only launch, Starr Hill will offer the same products to the market in package along with its seasonal Variety Pack series.

“Atlanta and Athens are the leading craft beer markets in the Southeast, and our decision to enter these markets is another big step for Starr Hill,” said Mark Thompson, founder and master brewer of Starr Hill Brewery. “We recognize the strength of the local craft beer scene, and we are thrilled to introduce our robust portfolio of beer to these consumers. We believe Atlanta and Athens will respond well to our beers, which are brewed with the highest quality and freshness standards in the industry. We are confident that the live-music culture and outdoor lifestyle of the Starr Hill brand will translate well with the people of Atlanta and Athens.”

Starr Hill will be distributed in metro Atlanta by General Wholesale Beer Company and by Leon Farmer & Company in the greater Athens market.

“Starr Hill is one of the most successful regional craft breweries on the East Coast,” said Howard Young, president of General Wholesale Beer Company. “Starr Hill combines the innovation of a world-class craft brewery with the attention to quality and execution you would expect from a brewing team that has been thriving for 14 years and counting. Starr Hill has made the investments in their facility and their people, allowing them to bring consistently great beers to the Atlanta market.”

As one of the most award-winning craft breweries on the East Coast, Starr Hill has won 19 Great American Beer Festival and World Beer Cup medals since its founding in 1999. Starr Hill recently took the Gold Medal in the American Cask Ale category for its Bourbon Barrel Cryptical Imperial Stout at the 36th Annual Campaign for Real Ale (CAMRA) Great British Beer Festival, beating out 196 other cask ales from the United States to claim first place.

“Mark Thompson, Brian McNelis, Duke Fox and their team are well known and well respected throughout the craft beer community for the wide array of high quality and creative beers that they brew,” said Leon Farmer III, President of Leon Farmer & Company. “We are eager to partner with an extraordinary craft brewery and to bring their superb beers to the greater Athens market.”