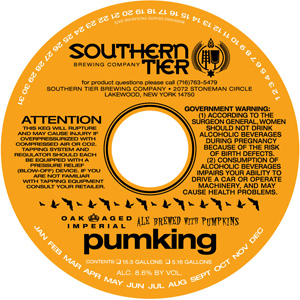 Those consumers still craving pumpkin beer into the winter months have one last release to look forward to on December 1st.

Southern Tier will be releasing an oak-aged version of their popular fall offering, Pumking.

“Every year there is more of a cry for that beer,” said Brewery spokesperson Nathan Arnone. “We brewed more of it this year and it still wasn’t enough.”

So the Lakewood, NY based brewery decided on brewing an additional batch, this one with a familiar twist — oak aging.

Southern Tier achieves their oak-aged quality by hanging pieces of oak directly into the fermentation tank and letting it ferment for 24-28 days. This time around, the brewery made 200 barrels which they will be distributing on draught only.

“We are really excited to oak age Pumking,” said Arnone. “It should add a lot to this beer and maybe next year we can bottle it.”

Oak Aged Pumking will only be available on draught in New York and Pennsylvania. Southern Tier is still projecting to hit 50,000 barrels produced in 2011. The brewery has produced 42,000 barrels already this year.