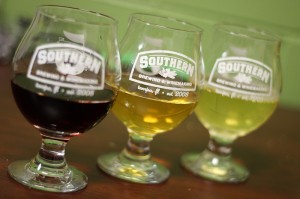 “We’ve worked with peppers in our brews before, but they were mostly just an accent,” stated brewer Rick Etshman. “This time, the peppers are the main focus of the flavor profile in the beer. It’s been really fun to play with different flavor combinations to create unexpected but delicious beers.”

Etshman drew inspiration for the beers from both traditional pepper flavor palates and new surprising combinations. Each beer was treated in the conditioning tank, instead of adding the peppers during the boiling process, in order to keep a more controlled hand on the exact pepper flavor imparted on the different beers.

Treatments available at the party will include:

All treatments will be tapped at 6pm and will be available for growler fills.

The release party will also feature live music from Dean Johanesen in the taproom. Flaming Taco will be on site serving fresh tacos with their special new mango habanero sauce.

The Cinco de Mayo celebration will last from 6-11p on Monday, May 5th. The event is family and pet friendly. For more information, call Southern at 813-238-7800 or visit their Facebook Page.