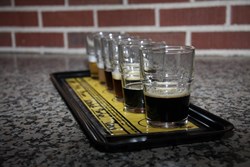 The South Shore Brewery Trail features nine local breweries and their locations. By selecting “View on Map,” visitors may plan out their own brewery tour while visiting the South Shore.

Figure Eight Brewing in Valparaiso brews seven beer styles year-round, as well as 35 seasonal beers throughout the year. The brewpub serves a selection of appetizers, small plates, sandwiches and entrees to compliment the beer.

As more breweries open along the South Shore, the South Shore Brewery Trail will expand and provide visitors with the most up-to-date information available.