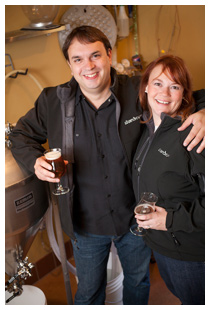 SOMERVILLE, MA — It’s exciting times for the fervent craft beer scene in the Northeast as the new Somerville Brewing Company proudly announces its launch of brewing operations. The new brewery is producing draft and 22 oz. bottles of its beer under the Slumbrew brand. Each beer is the result of extensive refinement and is designed to challenge preconceptions of standardized beer styles while making use of the highest quality ingredients. The first beers shipped during the week of October 24th and were very warmly received by an enthusiastic community of craft beer fans.

The brewing project is the culmination of over two years of preparation by founders Caitlin Jewell and Jeff Leiter. During the startup phase, Caitlin and Jeff did extensive travel and research on some of the most successful and innovative breweries around the country.

“We did over 10,000 miles of travel each year for several years in order to visit breweries and talk with brewers and patrons alike on what motivates them about the craft beer movement. It was a lot of fun, we met tons of great people and the experience really informed our approach to the Slumbrew beers and community we would like to help create,” said Caitlin who heads up Somerville Brewing’s marketing, events and promotion initiatives.

Critical to the launch of the brewery was the 350 sq. ft. nano-sized brewery that Caitlin and Jeff built in a small structure on their property in Somerville over the course of seven months in 2009. Building on ten years of home brewing experience, Jeff utilized this small brewery to develop and refine all of the recipes for Slumbrew.

“The Brewlab, as we call it, was really key to developing recipes unlike a lot of other mainstream beers since it allowed me to experiment with many different ingredients and techniques. The nano size provided great flexibility in what I could do and yet a dedicated brewing space with scaled-down professional equipment allowed very repeatable processes. This made for an opportunity to develop original beers that could be scaled up to commercial sizes when the time was right,” said Jeff, who is responsible for the production brewing, recipe development and procurement of all ingredients.

The first beers to be released as Slumbrew are Flagraiser IPA — a hoppy IPA dedicated to one of the first Grand Union flag raisings atop Prospect Hill in Somerville; Happy Sol — a hefeweizen brewed with local MA honey, coriander, orange peel and over 1,000 blood oranges; and Porter Square Porter — a malty chocolate porter brewed with cocoa powder and conditioned with cacao nibs from the local Taza Chocolate company. Other beers are currently in the R&D phase and will be released in early 2012 as they are perfected in order to round out a diverse and eclectic family of beer styles.

The Slumbrew brand name for the line of beers is an important part of Somerville Brewing Company’s concept. Each beer aims to be a world-class, innovative expression, yet understated and using locally sourced ingredients wherever possible. The name is a snarky throwback to the term ‘Slummerville’ because, as with the relationship between craft beer and large macro beers of the last century, the modern city of Somerville is nothing like its former days.

“Somerville is an incredibly vibrant place in its people, culture, businesses, food and beer. The best way to put the old term behind us as a community is to juxtapose its historical sense with the exciting new future of Somerville. For us, the name Slumbrew embodies a forward thinking enterprise to make exceptional beer with roots in a storied past,” said Jeff in describing the inspiration for the company.

Somerville Brewing Company maintains a business and operational office in Somerville near Teele Square, but don’t come looking for a tasting room just yet. The actual brewing is done similar to a lot of gypsy brewers in the US where the head brewer works with other larger and established breweries to produce batch sizes needed for commercial release. Jeff is currently brewing at Mercury Brewing in Ipswich, MA where he supplies all of the specialty ingredients for each brew day and is constantly monitoring the cellaring and production of finished products. The bottles and kegs are then distributed through Arborway Imports in Burlington, MA. A local Somerville presence with a tasting room is in the early planning phases but its timing is dependent on a multitude of local zoning and licensing factors.

The official launch party for Slumbrew will be held at The Independent restaurant and pub in Union Square on Friday, November 4 from 5-8pm where the first three beers will be available. This venue was chosen as it represents one of the leading beer bar establishments in Somerville and sits at the foot of Prospect Hill which is important to the story of Flagraiser IPA while also playing a significant role in the early history of the United States.