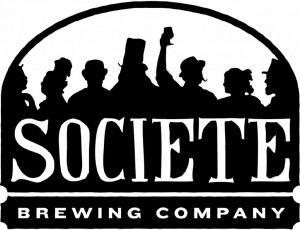 San Diego, CA – The Brewing Network, an internet radio company dedicated to delivering the best in beer entertainment and information, recently announced “The Harlot” from Societe Brewing Company as the Beer of the Year 2013. As a premiere live, radio show for all things craft beer, the Brewing Network tastes and comments on hundreds of beers each year.

During the annual Brewing Network Awards, the show’s brewcasters nominate several standout beers for Beer of the Year, memorable for the quality, taste, and overall impact of the beer. For 2013, The Harlot was selected as the Beer of the Year among several notable nominees. The award was announced live on the January 6, 2014 episode of the “Sunday Session.” Brewcasters Justin Crossley and Nathan Smith, as well as guest Mitch Steele from Stone Brewing Company, all commented on the outstanding quality of The Harlot.

The Harlot is an easy to drink crisp, light, and dry Belgian Extra. The beer uses a pilsner-lager recipe as its base, but the beer is fermented using one of Societe’s Belgian house ale-yeast strains. A well balanced set of floral hops, light malts, and the Belgian yeast all contribute to the complex, flavorful beer. The Harlot is brewed by brewmasters Travis Smith and Douglas Constantiner in the tradition of a lost style of beer, typical in the border region between Belgium and the Czech Republic.

Societe Brewing Company is a production brewery, opened in 2012 in San Diego, California, focusing on hoppy Out West ales, Belgian-inspired Old World ales, and dark and flavorful Stygian ales. The brewery also features a 3,000 square foot barrel room, and there are intentions to release a line-up of barrel-aged sour beers in the future. Societe’s beers are available in the Tasting Room at the brewery and locally throughout San Diego.