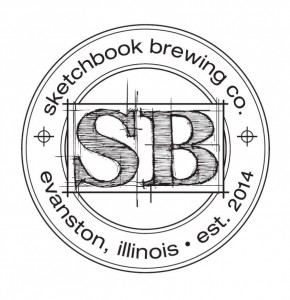 EVANSTON, IL — A lot can happen in a year — just ask Cesar Marron. Just one short year after his Gr├ñtzer recipe won the Sam Adams “Longshot” award, topping more than a thousand entries, Marron and his co-founder and business partner Shawn Decker will celebrate the Grand Opening of Sketchbook Brewing Company on Friday, November 21, from 4p.m. to 8 p.m.. Evanston’s first nanobrewery, Sketchbook is located in the Main and Chicago Business District, behind the orange door in the alley behind 825 Chicago Avenue.

Marron and Decker, along with their wives Amy Wilkinson and Alice George plus other business partners, have taken Sketchbook from just a gleam in their eyes at a back table of the Evanston Homebrew Club, to a model for a Community-Supported Brewery (CSB), in a city that’s hopping for craft beer.

“This has been a community-focused effort from the start,” said Sketchbook’s Shawn Decker. “In addition to the brilliant response to our Kickstarter campaign, which allowed us to expand our offerings and include sustainable equipment purchases, we’ve also seen great interest at the Custer Street Fair and Streets Alive Festival, and a huge outpouring of support from throughout the community, with roughly 300 CSB memberships already sold.”

Sketchbook will serve up to six different types of brews at a time including a gluten-free, cherry-infused cider option which features Michigan cherries from the Evanston Farmer’s Market. Sketchbook has also partnered with community restaurants and will “take over the taps” with flights of beer at their launch party from 5:00-9:00 at Prairie Moon on November 28th. And Sketchbook has been working with Evanston’s newest restaurant Boltwood to offer flights and food pairings early in the New Year as well.

While Sketchbook won’t officially open their doors for public sales until Friday, demand has already been high for the Community Supported Brewery model with a variety of membership levels ranging in price from $80 to $300 annually. Currently sold out, another membership offering is anticipated in the spring of 2015, as capacity allows.

To celebrate its official opening on November 21st, Sketchbook will provide their first 50 customers a glass growler free with purchase.For more information about opening events or other Sketchbook news, visit www.sketchbookbrewing.com, or find them on Facebook athttps://www.facebook.com/sketchbookbrewing.