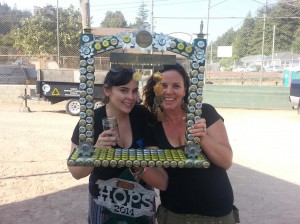 For the fifth time, Six Rivers Brewery won the “Best of Humboldt” award which is given to one local brewery by the judges, as well as the “Taster’s Choice” award for best brewery, chosen by event attendees. Six Rivers Brewery has been the undefeated crowd favorite since the festival began six years ago.

“We are so honored by these awards. We bring our game, we bring it all. We have the most beer varieties and unique beers. Plus, we get to see our head brewer, Carlos Sanchez, get a big smile on his face. It’s wonderful,” said Talia Nachshon, the brewery’s co-owner and head of the restaurant and catering.

Six Rivers Brewery is also growing in popularity outside of Humboldt County. A change with the company’s longtime beer distributor helped Nachshon and co-owner, Meredith Maier, regroup and evaluate their roles. They decided Maier needed to take more time to do sales while Nachshon would manage restaurant and catering exclusively. As the brewery’s new Brewhouse Coordinator, Maier’s efforts are already paying off.

“We are on track to be up over 20% from last year’s beer production. This equates to outside beer sales, as the bar sales stay pretty steady. We have picked up three new distributors outside of Humboldt County and now have solid distribution across California,” said Maier.

The restaurant and bar are hopping too. The brewery’s Instagram and Twitter feeds are filled with fans sharing pictures, while their Facebook page boasts nearly 7,500 likes.

“We are keeping it family-friendly while having lots of fun with live music, karaoke, and even speed dating. Plus, we have new infused desserts and specialty beer cocktails featuring Humboldt Distillery Vodka and Spiced Rum and Dutch and Dewey’s Farmhouse Vodka. Come have a beer with us. There is always something new,” said Nachshon.

Six Rivers Brewery is at 1300 Central Avenue in McKinleyville. Sixriversbrewery.com.