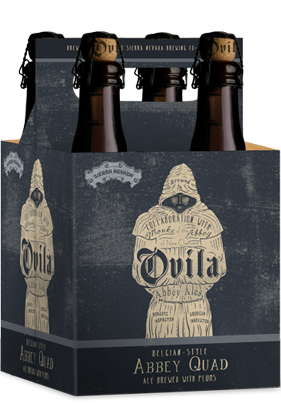 CHICO, Calif. — Fruits harvested from monastic grounds inspire the latest collaborative beers between Sierra Nevada Brewing Co. and the nearby Abbey of New Clairvaux. The ongoing Ovila Abbey Ale series features Belgian-style ales brewed in the centuries-old abbey tradition. Now available is Ovila Abbey Quad with Plums, which features plums from the monks’ 130 acres of plum orchards, and this summer will see the release of Ovila Abbey Saison with Mandarin Oranges and Peppercorns, brewed with mandarin oranges grown at the monastery in Vina, Calif.

“We’ve collaborated with the Abbey of New Clairvaux since 2010, and have brewed several great Ovila beers,” said Ken Grossman, Sierra Nevada’s founder. “Using ingredients grown at the monastery—harvested by the monks themselves—strengthens our connection and shows the evolution of the Ovila series. We’re of course excited to share these two beers.”

The monks of the Abbey of New Clairvaux follow the Rule of St. Benedict, which directs them to live by the work of their hands. The monks operate nearly 600 acres of working farmland and produce several crops, including plums, oranges, walnuts and wine grapes, among others.

Previous beers from the Ovila series include the 2012 World Beer Cup Bronze Medal-winning Belgian-style Dubbel, a Saison, and a Belgian Quad. Ovila Abbey Quad with Plums is a dark ale that boasts aromas of caramel, rich malt, and dark fruit balanced by the spiciness and delicate fruity notes of a traditional Belgian yeast. Ovila Abbey Saison with Mandarin Oranges and Peppercorns is a blonde farmhouse ale whose notes of lemon, pepper, grass, and herbs are balanced by the tang of mandarin orange and a spicy kick of white pepper.

“It’s special to see our community’s labor directly benefit the creativity of these beers,” said Father Paul Mark Schwan, Abbot of New Clairvaux. “For those who try them, we hope the ingredients lend themselves to a unique experience.”

Four-packs and draught of Ovila Abbey Quad with Plums can now be found at beer-centric venues in select markets. Sierra Nevada’s Beer Locator tool can help track down the beer: www.sierranevada.com/beer-locator. Ovila Abbey Saison with Mandarin Oranges and Peppercorns is slated for a June release.

Founded in 1980, Sierra Nevada Brewing Co. is one of America’s premier craft breweries, highly regarded for using only whole-cone hops and the finest quality ingredients. The pioneering spirit that launched Sierra Nevada spans more than three decades, with innovation emerging from both the brewhouse and sustainability initiatives. Sierra Nevada has set the standard for artisan brewers worldwide as a winner of numerous awards for its extensive line of beers including Pale Ale, Torpedo, Porter, Stout, Kellerweis and a host of seasonal, specialty and limited release beers.