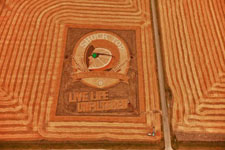 ST. LOUIS, MO – Shock Top and Stan Herd, the world’s preeminent representational Earthwork artist, are collaborating on a series of original Earthworks – a first for the artist and the beer brand. The series will reflect the essence of the beer, both theoretically (designed to embody the unique, free-spirit of the beer) and literally (produced with materials that are ingredients of the beer, including wheat and oranges). The series is comprised of three Earthworks, the first of which was unveiled today in Austin, Texas.

“With Shock Top, we’re always looking to extend beyond traditional marketing and find unique ways to reach beer drinkers – it’s what the beer’s personality is all about,” explains Paul Byrne, Brand Manager for Shock Top. “Stan is an amazing artist, who’s created his own medium. Once we met him and learned more about his craft, we knew it was a natural fit for Shock Top. Seeing his vision come together has been remarkable, and we’ve had an amazing response so far!”

An Earthwork is a piece of art that results from Stan Herd getting his hands on an expanse of earth and spending countless hours digging, plowing and otherwise manipulating the green space. The Earthwork in Austin occupies approximately five acres of land and required a crew of 10 to put in hundreds of hours over a period of eight weeks. Planted wheat was cut to different lengths to create various visual effects. More than 2,000 bags of crushed limestone, colored mulch and top soil were used as accent materials to lend texture to the piece. And finally, 20 crates of oranges were incorporated for color.

“Shock Top’s brand personality is about living life unfiltered and engaging with people of that same mindset. This philosophy resonates with the way I live and create art – outside of the norm, a little edgy, but always with a bit of fun mixed in. Each of the Earthworks reflects that philosophy,” said Herd. “Austin is one of my favorite cities – its vibrant music and art scenes make it the perfect setting to encapsulate the Shock Top persona and kick-off the series.”

The second Earthwork will be produced at a location in Southern California, followed by the last installment in New England. Details about the remaining Earthworks will be announced in the coming weeks on www.shocktopbeer.com and on Facebook at www.facebook.com/ShockTop.