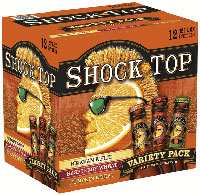 Available Aug. 29 through January 2012, Shock Top Pumpkin Wheat is a traditional Belgian-style wheat ale brewed with ripe pumpkins and a variety of autumnal spices, including nutmeg, cinnamon and cloves, for a refreshingly smooth beer with a deep amber color that captures the flavors of fall.
With a 5.2% ABV, Pumpkin Wheat will be sold nationwide in six-packs of 12-ounce bottles and on draught.

Shortly after the release of Pumpkin Wheat, look for Shock Top’s first variety pack, which features four bottles each of Shock Top Belgian White, Shock Top Raspberry Wheat and Shock Top Pumpkin Wheat. Sold nationwide, the 12-pack samplers will be available beginning Sept. 19 through the end of the year.

“The Shock Top family’s popularity just continues to grow — up nearly 77% in the first half of the year, and we want to keep bringing new offerings,” said Paul Byrne, brand manager for Shock Top. “We’ve already expanded the family this year to include new styles and packages, and we’re excited about new opportunities for the brand in 2012.”

Shock Top Belgian White is an award-winning Belgian-style unfiltered wheat ale, with a naturally cloudy and light golden color. Shock Top is brewed with orange, lemon and lime peels and coriander, giving it a refreshing, smooth taste and a citrusy aroma.