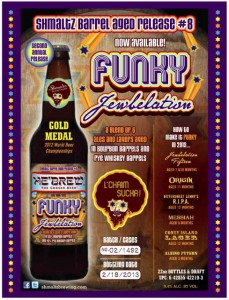 The national launch event for Funky Jewbelation will take place at Barcade (Brooklyn) during New York City Beer Week on Thursday, February 28, 2013, starting at 4 pm; this funky blend will also be featured at Shmaltz’s special beer dinner at Resto NYC on Tuesday, February 26, 2013 and at the New York City Beer Week Brewers Choice event at City Winery on Wednesday, February 27, 2013. Funky Jewbelation will be nationally available in 22 oz. bottles and a limited amount of draft at select locations from February – June 2013.

Funky Jewbelation has been hailed by critics including, Brewsandbooks.com commenting “Cheers to He’Brew for managing to, impossibly, blend six beers into a whole greater than it’s parts.” Yum Sugar notes, “…in this brewmaster’s skilled hands, the result is a beer with great depth and nuanced flavor.” Cooking District concludes, “The beer is indeed funky, in all the right ways.”

The Limited Engagement Barrel-Aged series not only represents some of Shmaltz’s most decorated beers, but also boasts the highest consumer ratings from BeerAdvocate.com and RateBeer.com. The latter recently ranked Shmaltz Brewing as one of the “Top 50 Breweries in the World” for 2012. With the release of Funky Jewbelation, Shmaltz continues to design unique and sophisticated beers that rank with the world’s best specialty beverages.

Established in San Francisco in 1996 with the first batch of 100 cases of HE’BREW Beer bottled, labeled, and delivered by hand, Shmaltz has sold more than ten million bottles of beer to date. Along with their acclaimed line of HE’BREW Beers, Shmaltz introduced its new line of sideshow-inspired Coney Island Craft Lagers. Shmaltz offerings are available in more than 30 states through 35 wholesalers at more than 3,500 retail specialty shops across the U.S., including Beverages & More, Whole Foods, Total Wine, select Krogers and Cost Plus.