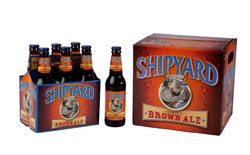 In this sanctioned Commercial Craft Competition, certified beer judges conducted a double-blind tasting in over 18 different categories to determine their favorites among the hundreds of beers entered in the competition.

More about the beers:

Brewer’s Brown Ale is full-bodied dark brown ale made with 5 different malts and 3 varieties of hops. This beer features a smoky taste up front and a smooth, full body finishing with a crisp hop bite at the back.

XXXX IPA is a non-traditional American IPA with a brilliant copper color and the classic citrus nose of Cascade Hops. This beer demonstrates a unique balance of malt-inspired, delicate red grapefruit sweetness and lingering hop dryness.

Pugsley’s Signature Series is named after Shipyard Brewing Company’s master brewer, Alan Pugsley. Pugsley is from Hampshire, England where he worked with Peter Austin at the world-famous Ringwood Brewery before moving to the United States in 1986.