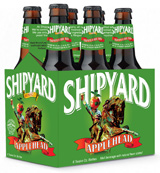 PORTLAND, ME — Shipyard Brewing Company announces the release of a new beer: Shipyard Applehead. An extension of the company’s popular Shipyard Pumpkinhead line, Shipyard Applehead is a seasonal brew available December through March, while supplies last.

“We asked Pumpkinhead fans what other flavors would they like to see and their answer was apple,” said director of sales and marketing, Bruce Forsley. “We listened to what our fans asked for and created Shipyard Applehead. Master brewer Alan Pugsley has combined the subtle sweetness of cinnamon and apple with a clean, refreshing wheat ale to create a whole new beer experience.”

Shipyard Applehead will be available first in New England and other markets across the United States will follow in January and February.

This week, Applehead will be on tap at pubs in New Hampshire and Massachusetts. Later this month, fans in those states will also be able to find this beer on store shelves.

Other New England states will have this product on draft at select locations starting next week.

In Maine, Shipyard Prelude Special Ale, the company’s award-winning winter seasonal, is available now and Shipyard Applehead will hit the market after the new year.

More about the beer: Shipyard Applehead is a crisp, refreshing wheat ale with a delightful apple aroma and subtle cinnamon flavor. This beer is available in 6-packs, 12-packs and on draft. The retail price for 6-packs ranges between $8.99 and $9.99 depending on location. Pricing for 12-packs ranges between $16.99 and $17.99.