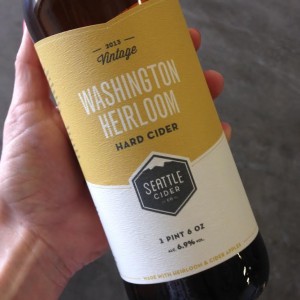 SEATTLE — Seattle’s only cidery, Seattle Cider Company, is excited to announce the launch of a new limited edition cider series, launching May 10 at The Woods tasting room! Seattle Cider’s Washington Heirloom series – a nod to the types of pre-Prohibition cider that started it all – features a unique blend of traditional heirloom and cider apples handpicked from Washington’s Yakima Valley. Hand pressed and bottled by the team at Seattle Cider Company, the 2013 vintage also features apples from Washington State University’s agriculture program — working to restore the cider apple population — which Seattle Cider has been working closely with since opening. To be released only once a year in limited quantities, this one-of-a-kind cider will be available in 22-ounce bottles at its launch party, beginning at 1pm on Saturday, May 10 at The Woods tasting room in SoDo.

“This is a true specialty cider, showcasing the amazing apples found in Washington state and the flavors they impart,” said Seattle Cider Company founder Joel VandenBrink. “Sticking to our goal of approachable, dry ciders, the Washington Heirloom series offers flavors not found in any of our other offerings and I think it’s one cider fans will absolutely enjoy.”

The 2013 vintage of Seattle Cider’s Washington Heirloom cider features aromatic Winesaps and pleasantly acidic Newtown Pippins from the Yakima Valley, in addition to seven varieties of traditional French and English cider apples, grown at Washington State University’s extension campus in Mount Vernon, Wash. Delicate, tart and perfectly nuanced, this unique cider begins with soft aromas of peach and black cherry. A mild dryness on the tongue carries with it notes of tangerine, cantaloupe, black cherry, sweet lime and tart green apple. Leaving the palate dry, even with lingering aromas of peach, the 2013 Washington Heirloom offers a 6.9 percent ABV and just 1.8 Brix of sweetness.

Cider lovers can purchase 22-ounce bottles of Washington Heirloom cider for $14 each at the launch party on Saturday, May 10 beginning at 1pm (12pm for Mug Club members) at The Woods tasting room. Ten ounce tasters will be available for $7 each. . Popular food truck How Pickle Got Out of a Jam will also be on site for the afternoon, serving up delicious Northwest eats. As a special bonus, Seattle Cider Company’s sister company — Two Beers Brewing — will be launching the second beer in its limited edition Alta Series the same day as part of Seattle Beer Week. The coveted Ascension Triple IPA, available in 22-ounce bottles for $14 each, is a powerful yet balanced beer ringing in at 12 percent ABV and 100+ IBUs. The rest of the 18 taps featured at The Woods tasting room, now open until 10pm on Saturdays, will be filled with an exciting selection of limited edition and year round cider and beer.

Not your standard cider. Seattle Cider Company is the city’s first cidery since Prohibition, bringing true craft cider back to Seattle. Bridging the gap between wine and beer with flavorful, small-batch cider, Seattle Cider’s initial offerings — Dry and Semi-Sweet — break the mold of overly sweet cider, bringing the natural flavors of Washington apples to the forefront. Naturally gluten free and made from a custom blend of fresh pressed, locally grown apples, Seattle Cider’s products are handcrafted with all natural ingredients and never from concentrate, successfully distinguishing themselves from the mass market cider found in stores today. Available in 16-ounce cans, Seattle Cider products are available at retailers and bottle shops throughout Seattle. Seattle Cider is also available on tap in Seattle-area bars and restaurants, with tastings, kegs and growler fills available at The Woods tasting room, located at 4700 Ohio Ave. S. in SoDo, open weekly Tuesday – Saturday. For more information, visit seattlecidercompany.com, or follow Seattle Cider Company on Facebook and Twitter (@seattleciderco).