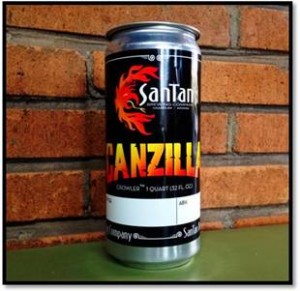 Chandler, Arizona — It’s official, on July 24, 2014 Arizona craft beer lovers will now be legally allowed to purchase and fill growlers made of materials other than glass. So, in true SanTan Brewing Company style — the CanZilla Crowler is born!

“The Arizona Craft Brewers Guild fought a great battle on our behalf to get the growler laws changed in Arizona. To celebrate these exciting times in local craft beer we are working to continue our promotion of the can as the superior packaging method,” said Anthony Canecchia, founder and brewmaster, SanTan Brewing Company.

The 32 oz Crowler system will allow patrons to take their favorite SanTan beer to go including small batch seasonal brews that are only available at SanTan Brewing and not in stores — fresh from the tap, daily. These single use, recyclable cans are packaged, labeled and sealed right at the pub and are easily transported to any outdoor adventure or tailgate. Once sealed, each CanZilla Crowler keeps its freshness for up to seven days.

SanTan Brewing Company is the first brewery in Arizona to offer the CanZilla Crowler as an aluminum alternative to the traditional glass growler. There are about to be a lot of happy Count Hopula and Winter Warmer fans at SanTan this year.