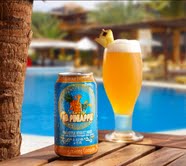 Winner of a silver medal at the 2011 Great American Beer Festival competition, Mr. Pineapple is a refreshing and fruity traditional German Wheat ale with natural pineapple juice added. It was originally developed as a signature brew for SanTan Brewing Company’s annual Luau celebration during the summer months in Arizona. Mr. Pineapple has a hazy straw gold color and is five percent alcohol by volume (ABV).

“We are excited to offer our customers the opportunity to take our perfect summer seasonal brew with them on their outdoor adventures,” said Anthony Canecchia, owner and head brewmaster of SanTan Brewing Company. “And by teaming with Rexam, we are able to meet the growing demand for our products across Arizona and beyond in the most recycled beverage package.”

The company chose Rexam cans because they help its beers stand out in a crowded marketplace. SanTan also benefits from the many advantages that aluminum cans deliver for beer including durability, portability and light barrier properties that preserve freshness. In addition, cans are the best sustainability choice with a recycle rate at more than double other beverage packages.

“It is a pleasure to continue our partnership with SanTan Brewing Company as they expand their product line,” said Rich Grimley, president and CEO, Rexam Beverage Can North America. “The aluminum can is the perfect packaging solution, enabling the brand to stand out on retail shelves with colorful, reflective graphics while delivering superior recycling, filling, distribution and retail display economics.”

In November of 2012, SanTan Brewing Company launched Arizona’s first ever seasonal canned beer series with the introduction of Rail Slide Imperial Spiced Ale. Mr. Pineapple is the brewery’s third seasonal brew to be launched in aluminum cans and will be available at select retailers in Arizona by the end of this month.

Open since 2007, under the leadership of head brewer and owner, Anthony Canecchia, SanTan Brewing Company has established a strong reputation as Arizona’s favorite craft beer. In addition to brewing, SanTan features a friendly neighborhood brewpub in Downtown Chandler, which has quickly become one of the top local food and beer destinations in the East Valley.

In 2009, SanTan Brewing began distributing their core and seasonal brews throughout the state of Arizona, operating with a mission to pair craft beer with craft food that would inspire great conversation and good times. The brewpub and SanTan beers have won numerous national and state-wide awards including a silver medal at the 2011 Great American Beer Festival, a gold medal at the 2012 US Open Beer Championships and 2011 Best Brewery in Arizona, selected by the Phoenix New Times.

We have 67 plants in 24 countries and employ 11,100 people. Our sales from ongoing operations in 2012 were in the region of $6 billion. Rexam is a member of the FTSE 100 and its ordinary shares are listed with the UK Listing Authority and trade on the London Stock Exchange under the symbol REX.