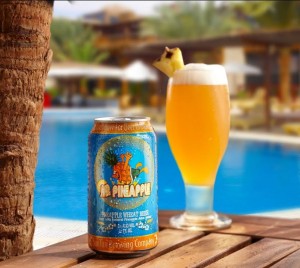 Winner of the silver medal at the Great American Beer Festival competition, Mr. Pineapple is a refreshing and fruity traditional German Wheat Ale using 2-Row, White Wheat, Caramel and Munich malt. Fresh pineapple is added during the primary fermentation then crushed and cooled to allow the natural flavors to infuse the traditional wheat beer for a refreshing twist.

Mr. Pineapple will be available in cans and on tap throughout Arizona, Southern California, and Texas in April — September, 2014.

Open since 2007 under the leadership of head brewer and owner, Anthony Canecchia, SanTan Brewing Company has established a strong reputation as one of Arizona’s favorite craft breweries. In addition tobrewing, SanTan features a friendly neighborhood brewpub in Downtown Chandler, which has quickly become one of the top local food and beer destinations in the Phoenix metro area.

All SanTan Brewing Company craft beers are Southwestern Style Ales. SanTan’s brews are fermented to completion and carbonated higher than traditional American beers for a more effervescent, crisp and refreshing hand crafted beer — perfect for quenching your thirst in the hot Arizona sun and throughout the southwestern region of the U.S.

SanTan beers have won numerous national and statewide awards including two medals at the U.S. Open Beer Championship: bronze in 2013 and gold in 2011. SanTan Brewing also took home a silver medal at the 2011 Great American Beer Festival and won Best Brewery in Arizona, selected by the Phoenix New Times and the Arizona Republic, in 2013 and 2011.