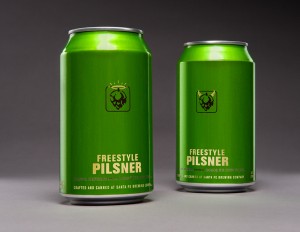 SANTA FE, New Mexico – The Santa Fe Brewing is announcing the 2014 release of its summer seasonal, The Freestyle Pilsner.

Freestyle Pilsner is the brain child of head brewer, Ty Levis, who felt like the Santa Fe Brewing family of beers needed a warm weather, thirst quenching lager. The beer will hit stores on May 3 and will be available in cans and kegs throughout their 9 states of distribution.

As its name suggests, this Pilsner does not like to be categorized. Inquiring whether it is a German, Czech, Bavarian, American, or any other style pilsner will result in an impatient sigh and the explanation that the whole philosophy behind this pilsner is that it does not fall into any categories. True, it is brewed with traditional ingredients (soft water, pilsner malt, saaz hops, and German yeast), but it is the way that these ingredients interact, and the characteristics of the yeast, that cause this particular pilsner to defiantly stand alone. The assertively hopped Freestyle pils exudes the flavor and the aroma of the classic Saaz hop (a tribute to “the original” pilsner), while maintaining enough body to balance but not overpower this hop’s pleasant, spicy tone. An unhurried lagering process so frequently overlooked by American craftbrewers is strictly adhered to in the production of Freestyle, which makes this beer by far the most light, clean, and quenching beer in the Santa Fe Brewing Company’s line up.

To celebrate the release of the Pilsner, Santa Fe Brewing is hosting a release party at their main tasting room (35 Fire Place, Santa Fe, NM) on Saturday, May 3 from 12-6pm.

The Freestyle Pilsner will be available for a limited time to both draft and retail accounts in New Mexico, Arizona, Colorado, Texas, Oklahoma, Kansas, Missouri, Louisianna, and Nevada.