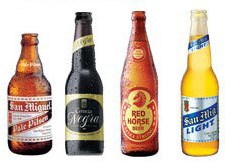 Irvine, CA — G.K. Skaggs is pleased to announce the states of California, Arizona and Nevada will now have access to the Philippines original brand San Miguel Beer, effective as of the first of July. The growing consumer demand for San Miguel’s Beer brands has been brought to the attention of the San Miguel Corporation, in which the brewery would like to expand its reach in the US market.

National Beer Sales Manager Chris Kaesman, leading the revival of the beer brand’s expansion expressed, “With San Miguel being the iconic beer brand of the Pacific, we are proud to be the authorized suppliers to the Southwest. We have worked very hard on this expansion which represents G.K. Skaggs’ commitment to supplying premium beverages on a national scale.”

G.K. Skaggs is working alongside the following distributors in order to bring San Miguel Pale Pilsen, San Miguel Light, Red Horse and Cerveza Negra sku’s to key on and off-premise accounts, as well as major retail chain accounts throughout all trade channels.

G.K. Skaggs is currently seeking distributors to cover several territories in the Midwest and North regions. To learn more information about San Miguel Beer in the US market or to express interest in distributing San Miguel Beer in California, Nevada or Arizona, please contact Chris Kaesman at chriskaesman@gkskaggs.com Or call at 949-752-1500 ext. 102.

San Miguel Beer headquartered in Southeast Asia, been has creating top quality beers for over 120 years. San Miguel is the largest brewery in the Philippines and one of the world’s top beer producers. San Miguel Light, San Miguel Red Horse, Cerveza Negra and the classic San Miguel Pale Pilsen have recently been launched in select regions of the United States.

G.K. Skaggs, Inc., founded in 1984, has become a nationally recognized “top 10 importer” in the US. Specializing in the sales, marketing and distribution of Premium and Specialty Imported beers and wines has a strong portfolio including products from Europe, Latin America, Asia and the Pacific Regions. G.K. Skaggs is a longstanding member of the following industry organizations; NBWA, CBBD, PLMA, IBA and WSWA.