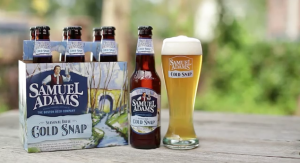 BOSTON, MA — The brewers at Samuel Adams are ushering in the new year with a new spring beer—Samuel Adams Cold Snap—the newest addition to the brewery’s popular seasonal beer collection. Brewed for spring’s transition away from the hearty brews of winter to the bright, lighter-bodied beers of summer, Cold Snap is the brewers’ take on a Belgian-style white ale made with crisp golden wheat and a lively blend of ten different fruits, flowers and spices.

Historically, white ales were brewed with a variety of spices, most commonly orange and coriander, as brewers looked to the spice trade for ingredients before the advent of hops. The brewers at Samuel Adams took a different spin and expanded upon this tradition with Cold Snap, incorporating a wide range of ingredients from around the world, places like West Africa (Grains of Paradise), Turkey (anise), Egypt(hibiscus), India (tamarind) and the US (fresh-ground coriander from California). The delicate hop character of German Hallertau Mittelfrueh Noble hops and the crisp smoothness of Canadian malted wheat balance the unique spiciness of the brew.

What Jim Koch, Founder and Brewer, has to say about the beer: “As brewers, we’re like chefs, inspired by the weather and the seasonality of ingredients and flavors. I’ve always said that spring is one of the most challenging seasons to brew for. It’s a tweener — we’re waiting for winter to be over and longing for summer to arrive. For us, Cold Snap captures this sentiment with its crisp wheat and vibrant fruits, flowers and spices, yielding flavors ranging from the subtle sweetness of orange peel and plum to the distinct, peppery bite of fresh ground coriander.”

How to get your hands on a bottle:

Today, The Boston Beer Company brews more than 50 styles of beer. It relentlessly pursues the development of new styles and the perfection of classic beers by searching the world for the finest ingredients. Using the traditional four vessel brewing process, the Company often takes extra steps like dry-hopping, barrel-aging, and a secondary fermentation known as krausening. The Company has also pioneered another revolution, the ‘extreme beer’ movement, where it seeks to challenge drinker’s perceptions of what beer can be. The Boston Beer Company has been committed to elevating the image of American craft beer by entering festivals and competitions around the globe, and in the past five years has won more awards in international beer competitions than any other brewery in the world. As an independent company, brewing quality beer remains its single focus. Although Samuel Adams beer is America’s largest-selling craft beer, it accounts for only one percent of the U.S. beer market. The Boston Beer Company will continue its independently-minded quest to brew great beer and to advocate for the growth of craft beer across America. For more information, please visit www.samueladams.com.