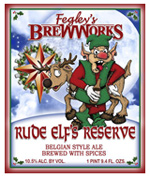 When asked to comment on this matter Jeff Fegley responded, “We have no further comment. You may direct any questions to me via email only at jeff@thebrewworks.com.”

When asked if Troegs would be attending the Allentown Brew Works Beer Festival this Saturday, December 3rd, Fegley responded, “Unfortunately no, they are tied up with their new brewery expansion.”

When asked about this year’s batch of Rude Elf’s Reserve, Fegley noted that it is “better than ever. We added two new 30bbl fermentation tanks this year and are really happy with how the complexity of the flavor profile has come together. The 1999 recipe has only been tweaked slightly over the years as the equipment changed, and was a Medal Winner at the Great American Beer Festival in 2009.”

Like many craft breweries, in 2011 Fegley’s Brew Works has seen a giant increase in business. “We are at full capacity projected to brew about 3,800 barrels of beer in the next 12 months at our Allentown facility alone. We are adding 3 more 30 barrel fermenters in the next few months.” said Fegley.

There are only limited quantities of this year’s Rude Elf’s Reserve left so get them while they last! Or sample them at the annual Allentown Beer Festival this Saturday afternoon with almost 30 other breweries attending. Look for Fegley’s Brew Works products at Shangy’s Beer Authority, Whole Foods, Wegmans and Tanczos, or sample their fine brews at locations like PJ Whelihans (Allentown and Bethlehem), Dunderbaks (Whitehall), Porter’s Pub (Easton), TGIFriday’s (Quakertown), Wise Guys Beer Depot (Allentown) and a distributor near you.