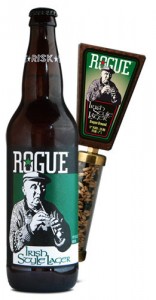 Rogue Irish Lager is the craft beer for St. Patrick’s Day. In true Irish Lager fashion, this brew has sweet aromas that follow through with a full malty and rounded palate; a refreshing alternative to the usual dark, heavy stouts featured on the occasion.

Rogue Irish Lager begins in the dirt; brewed with Dare & Risk Barley and Independent Hops that are grown and harvested at Rogue Farms in Independence and Tygh Valley, Oregon. When you grow it, you know it.

Rogue Irish Lager will be available nationwide February & March, 2014 in draft and in 22oz serigraphed bottles.

From the Cliffs of Moher to the shadow of Mt. Hood, Rogue Ales & Spirits is dedicated to saving the terroir of Oregon by growing your own.