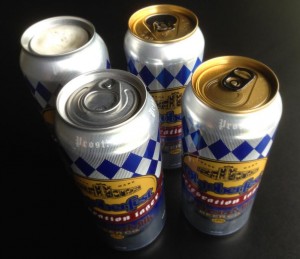 Rochester, MI — Are you ready for some football and craft beer? The Rochester Mills Beer Co. & Production Brewery will debut this year’s batch of Oktoberfest Celebration Lager in 16 oz. cans utilizing the innovative 360 EndÔäó beverage can technology developed by Crown Holdings, Inc. (www.crowncork.com) at Ford Field, home of the Detroit Lions just in time for their National Football League home opener on Monday Night Football, September 8th. The entire lid of the can is removable, turning it into a convenient topless drinking vessel and eliminating the need for separate glassware.

“The topless can technology allows the full flavor and aroma of the beer to hit the drinker’s senses and makes the can the perfect package for sporting or concert venues and situations where you want to be able to serve beer easily in a light, non-breakable container,” says Rochester Mills founder Mike Plesz.

Rochester Mills was the first local craft beer available on draft and in 16 oz. cans at Ford Field.

Rochester Mills Beer Co. has been one of the top producing brewpubs in Michigan since it opened in 1998. The brewpub offers a diverse beer menu with eleven different styles of beer consistently available as well as a number of reoccurring seasonal offerings. The Rochester Mills Production Brewery, brewers of Rochester Mills Beer Co. brands for distribution, began as a startup brewery in Auburn Hills, Mich. in 2012, quickly becoming one of the top craft beer producers in the state. Their Lagers and Ales, packaged in 16oz. aluminum cans, are currently featured in grocery stores as well as independent and franchise convenient stores, and specialty beverage merchants statewide. Additionally, their four core brands, which include Milkshake Stout, Lazy Daze Amber Lager, Cornerstone IPA, and Rochester Red Ale, along with rotating seasonal offerings, can be found flowing from more than 750 taps at bars and restaurants across Michigan and North West Ohio.

More information can be found on their website at: www.beercos.com.

Crown Holdings, Inc., through its subsidiaries, is a leading supplier of packaging products to consumer marketing companies around the world. World headquarters are located in Philadelphia, PA. For more information, visit www.crowncork.com.