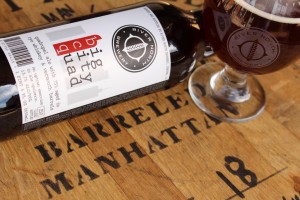 Denver, CO — When River North’s brewers got their hands on barrels that used to hold a Manhattan cocktail blend, they wanted to push their limits, filling them with a lavish and luxurious brew, a celebration of everything delicious and decadent about barrel-aged beer.

In doing so, they created Big City Quad, a 13.7% Manhattan-aged Belgian-style Quadrupel, which will debut Saturday, October 18th at 1pm in the River North taproom.

“The Manhattan is such a beautiful cocktail, we had to do it justice. So we brewed our highest-gravity beer yet,” Head Brewer Matt Hess said. “Ten months later, there’s only one way to describe the result. Big City Quad is an uptown exercise in ale opulence.”

Rye whiskey, sweet vermouth and bitters compliment sweet Belgian malts, creating a timeless classic that can be savored now or cellared for years.

Both draft pours and bombers-to-go will be available at the release party. River North bottled 150 cases of Big City Quad, which will cost $15 with a limit of three. More bottles will ship to stores in Colorado and Kansas City in the weeks following the release.