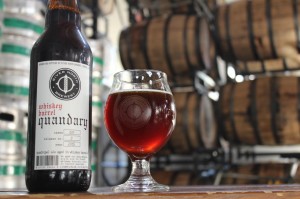 Jealousy was running high after the celebrated October debut of the now infamous Big City Quad, aged in Manhattan cocktail barrels. But now Whiskey Barrel Quandary has been resurrected to claim its rightful place on the throne of River North Quads.

“This is one of my favorite bottles to crack when hosting friends,” Founder and Brewmaster Matt Hess said. “It’s a beer for special occasions.”

A blend of Quandary aged in rye and bourbon barrels, Whiskey Barrel Quandary bursts with notes of ripe plum, rye whiskey spice and a malty, bourbon-infused kick. Finishing at 12.7% ABV, this beer can be savored now or cellared for years.

Both draft pours and bombers-to-go will be available at the release party. With 120 cases total, bottles will cost $15 with a half-case limit. More cases will ship to stores in Colorado and Kansas City in the weeks following the release.

This release marks the beginning of a big year for River North. Look for their annual Anniversary Ale in February, and a new farmhouse ale in 16-ounce cans in March.

Matt and Jessica Hess opened the award-winning River North Brewery in February 2012. Brewing in the RiNo district of Denver, River North focuses on yeast-centric beers with Belgian-style flair. River North’s beers can be found throughout Colorado and in the Kansas City Metro Area. Like the brewery on Facebook (facebook.com/rivernorthbrewery) or follow on Twitter/Instagram (@rivernorthbrew) for the latest insights.