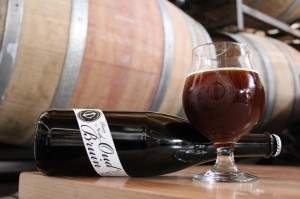 Oud Bruin is an exercise in balance; rich Belgian malt notes blend with tartness from a partial lactobacillus fermentation, funk from brettanomyces and a pleasant finish lended by extensive red wine aging.

“I was blown away by how this beer was transformed in the barrel,” Head Brewer Matt Hess said. “I just wish we had more of it!”

Oud Bruin is one of River North’s most limited beers to date. With only 50 cases total, 750ml bottles will cost $20 with a 2-bottle limit in the taproom. Draft pours will also be available. The best bottle shops in Colorado will receive a very limited allotment following the June 14th release party. River North recommends you drink one bottle fresh and cellar the second, as Oud Bruin will develop nicely over time.

No tickets required; the release party is open to the public.

Matt and Jessica Hess opened the award-winning River North Brewery in February 2012. Brewing in the RiNo district of Denver, River North focuses on yeast-centric beers with Belgian-style flair. Like the brewery on Facebook (facebook.com/rivernorthbrewery) and follow on Twitter/Instagram (@rivernorthbrew) for the latest insights.