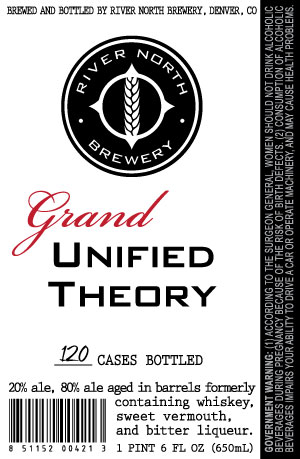 Nowadays any brewery worth their malt experiments with barrel-aged beers. But River North Brewery has taken it a step further, filling barrels that previously held classic cocktails – and now the first is ready for release.

“We jumped at the chance to get these barrels,” Head Brewer Matt Hess said. “I try to push flavor boundaries with our barrel-aged brews, and cocktail-aging is the next step in redefining what beer can taste like.”

Straight bourbon whiskey, sweet vermouth and bitter orange liqueur lend Grand Unified Theory a spicy citrus note that is the perfect complement to its robust wheat backbone. The result is a unique and unforgettable brew unlike anything you’ve tasted before.

Both bottles and draft pours will be available at the July 26th release party. Bombers will cost $15 with a 3-bottle limit. More will arrive on store shelves throughout Colorado following the release.

River North has two other cocktail-aged brews in the works. Big City Quad will be a quadrupel aged in Manhattan barrels, and Barrel Blonde will be aged in a blend of whiskey, Boulevardier and Manhattan barrels. The latter was a taproom-only experimental brew which will now be released in bottles. Look for both these beers in late summer.