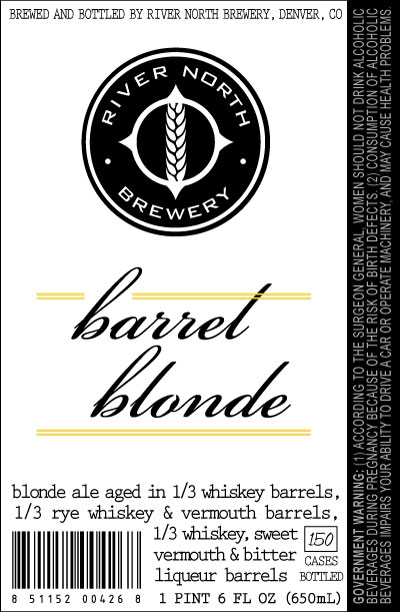 Denver, Colo. — Earlier this summer, River North Brewery poured an experimental barrel-aged beer exclusively in the taproom. The brewers grew so fond of their concoction, they decided to recreate it for a specialty bottle release.

On Saturday, September 13th at 1 pm, River North will re-introduce Barrel Blonde, a Belgian-style blonde ale aged one of three ways — in bourbon, Manhattan or Boulevardier cocktail barrels — then blended. The result is a beer of indescribable complexity.

“This was such a delicate beer to begin with, we knew we had to carefully age it for just the right amount of time,” Head Brewer Matt Hess said. “The notes imparted by the cocktail barrels elevate this beer to the next level.”

Both draft pours and bombers-to-go will be available at the taproom during the release party. Bombers will cost $15 with limit of three. With 147 cases total, more bottles will arrive on Colorado shelves the week after the taproom release. The Kansas City Metro area will see bottles a few weeks later.