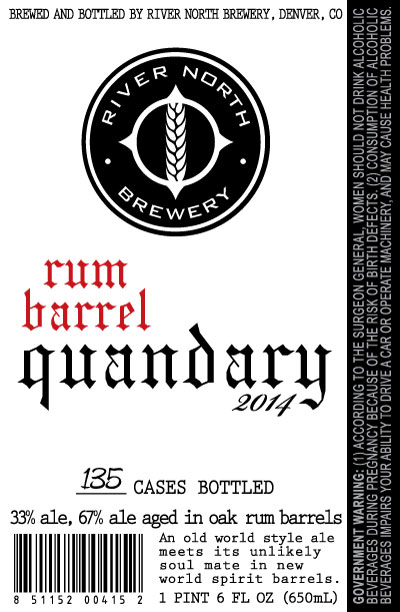 Both draft pours and bombers-to-go will be available at the release party, and the brewery will also have a limited amount of last year’s vintage on tap.

Sweet, spicy and decadent, Rum Barrel Quandary balances the sweet malts of a Belgian-style dark ale with the sharp kick of new world spirits. At 10.2% ABV, River North recommends you enjoy a bottle amongst friends over a good meal.

“High quality rum barrels can be hard to come by when you’re based in Colorado,” Head Brewer Matt Hess said. “I can’t say for sure whether we’ll be able to release this beer every year, but if we can find the barrels, we’ll keep brewing it.”

In total, the brewery bottled 135 cases. Colorado stores will receive Rum Barrel Quandary the week after the release party. A limited amount will also make it to the Kansas City area for River North’s September 16th kickoff week.