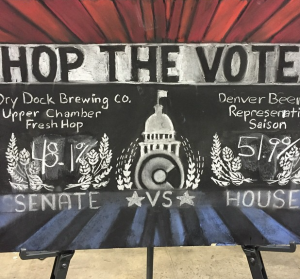 “Beer plays a vital role in the Colorado economy and this competition shows just how much support our state government has of small businesses,” said Chris Holbert, State Representative Colorado House District 44. “Thank you to the Colorado Brewers Guild for bringing Democrats and Republicans together from the House and Senate in support of brewers state-wide. It was a great event and Colorado is truly the state of craft beer.”

The 2014 Hop the Vote competition winner was selected by 894 GABF attendees. The House received 51.9 percent of the votes.

“We are thrilled that Representative Saison won,” said Patrick Crawford, co-founder of Denver Beer Co. ”We like the Senate, however clearly the House knows a bit more about brewing a beer for the people.”

About the Colorado Brewers Guild