2017 was historically bad for U.S. brewers, who shipped 3.8 million fewer barrels of beer than the previous year, according to the Alcohol and Tobacco Tax and Trade Bureau’s (TTB) unofficial estimate of domestic tax paid shipments.

According to industry trade association the Beer Institute (BI) — which represents the interests of all brewers and importers and publishes the TTB’s monthly estimates — U.S. beer companies shipped about 170 million barrels of beer in 2017, compared to nearly 174 million barrels in 2016.

In a note to BI members, chief economist Michael Uhrich said the 2.2 percent decline in shipments is “the largest percentage decrease in annual domestic beer shipment volume since 1954.”

Beer shipments from U.S. breweries declined in seven of the 12 months last year, which ended on a sour note as December shipments fell 8 percent (more than 1 million barrels) versus the same period last year. Only February was worse as U.S. beer producers shipped about 1.2 million fewer barrels than they did in 2016.

On the flip side, U.S. brewers shipped the most barrels in May and June — more than 16.2 million and 16.8 million barrels, respectively.

Bart Watson, the chief economist for the Brewers Association, which represents the interest of small and independent beer companies, attributed some of the domestic shipment losses to consumers trading domestic lager and light lager brands for imported lager and light lager brands. The TTB’s estimates don’t reflect shipments of imported products; those figures are slated to be released by the U.S. Department of Commerce in the coming weeks.

“There are a variety of reasons (marketing/branding, demographics, etc.) but I would expect this to continue for the medium term,” Watson wrote in an email to Brewbound. “This doesn’t explain the overall down year, but does partially explain why domestic shipments are historically poor.”

Watson pointed to the growth of wine and spirits as another reason why shipments slipped, noting the overall beer industry hasn’t responded to changes in consumer preferences.

“It’s hard to hold volume when you are trading middle/low price cases for higher price cases,” he wrote.

“We should be leaning into the upper end of beer that is growing and focusing on how beer can meet the demand for experiential occasions, rather than focusing on what can return premium light to growth through previous models,” he added. 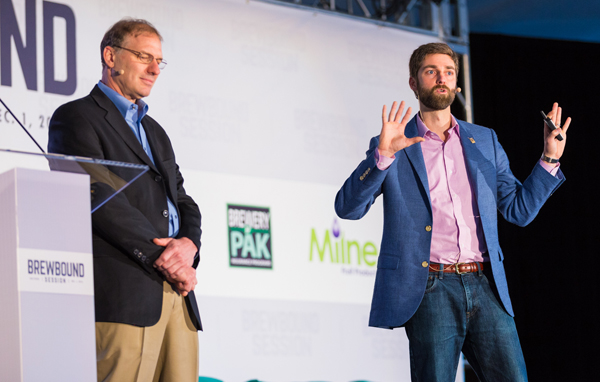 “Yes, segments of the industry are in trouble, and there is no way for all these new small guys to make up the difference,” Jones told Brewbound. “But, if you look back on the history of revised TTB beer reports for 2015 and 2016, you will see the industry produced more barrels than was originally reported at the end of each year. It just too soon to dial in on a final trend for 2017.”

Jones added that he’s “optimistic” about the industry’s future outlook.

“Despite the negative volume trends, it seems there are still plenty of incentives encouraging new entrants into the industry,” he wrote, citing the reduction in the federal excise tax along with more relaxed bonding and reporting requirements.

In order to help return the overall beer category to growth, the BI and NBWA each passed resolutions at the end of last year to work together in 2018 to improve beer category health and recapture dwindling market share from wine and spirits companies, which have taken approximately 35 million barrels of volume from the beer industry over the last 20 years.

“2018 has to be a year in which we take action,” Beer Institute CEO Jim McGreevy told Brewbound in December.