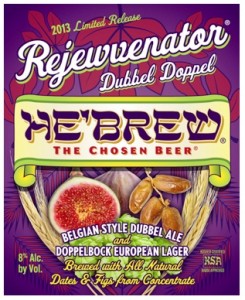 Rejuvenate your taste buds with the sacred nectar of dates and figs — both fruits infused to create a truly glorious species. Inspired by the spiritual brewing traditions of the monks, and the divine fruits of the Holy Land, this half Belgian-Style Dubbel Ale, half Doppelbock European Lager, is the only one of its kind in the world. Like the mystical monks, the 8% alc. Dubbel-Doppel makes a clean, quiet entrance — before the dark fruit flavors begin to crescendo into harmonious notes of creamy caramel. For a limited time, ancient traditions sing a modern tune in both 22 ounce bottles and draught at a store/bar near you.

Rejewvenator┬« 2008 (brewed with Figs) was touted by critics, including All About Beer who highlighted the brew in its “Beer Talk” tasting section and raved, “It’s a glorious beer.” Oakland Tribune proclaimed, “Don’t miss this one!” Rejewvenator┬« 2009 (brewed with Dates) was recognized by L Magazine as a “Top 10 Summer Beer In & Around NYC.” San Jose Mercury News raved, “The best summer release that’s against the season is without a doubt HE’BREW’s Rejewvenator.” Rejewvenator┬« 2010(brewed with Concord Grapes) brought home a Gold Medal from the World Beer Championships.

The experimental process of brewing Rejewvenator┬« 2013 begins with 5 specialty malts and 5 hop varieties blending European tradition with brazenly innovative American craft beer flavor and attitude. The brewers use Lager yeast to start cold, bottom fermentation then let the beer warm and pitch a hybrid Abbey/Trappist Belgian Ale yeast brought in exclusively for this brew. Finally all natural Date and Fig Concentrates are infused into the fermenter. Rejewvenator┬« then sits and ages for several weeks before centerfuge filtration and packaging. A luscious tribute to the original craft beer warriors, the Monks, and a fitting welcome to warmer days and the new life of Spring and Summer. L’Chaim!

About Shmaltz Brewing Company
Ranked in 2013 as one of the “Top 100 Brewers in the World” by RateBeer.com, Shmaltz won 9 Gold and 5 Silver Medals in the Word Beer Championships in 2012. A recipient of the “Distinguished Business Award” by the Brooklyn Chamber of Commerce, Shmaltz was also included in the “Top 50 Fastest Growing Bay Area Companies” by San Francisco Business Times.

Established in San Francisco in 1996 with the first batch of 100 cases of HE’BREW Beer┬« bottled, labeled, and delivered by hand, Shmaltz has sold more than ten million bottles of beer to date. Along with their acclaimed line of HE’BREW Beers┬«, Shmaltz introduced its sideshow-inspired Coney Island Craft Lagers┬« which celebrate the spirit of “America’s Playground.” Shmaltz offerings are available in more than 30 states through 35 wholesalers at more than 3,500 retail specialty shops across the U.S.

With the opening of the “World’s Smallest Brewery” in Coney Island, NY (1-gallon at a time, since 2011), Cowan spearheaded the creation of the non-profit New York City Brewers Guild in 2012 and serves as its President.

After 16 years as one of contract brewing’s loudest cheerleaders, Shmaltz is breaking with tradition and opening its own New York State production brewery. Located in Clifton Park, NY, 10 minutes north of Albany’s capital district, Shmaltz’s new home boasts a 50-barrel brewhouse with 20,000 barrels of annual capacity. The heart of Shmaltz’s new operation features a custom-made, 5-vessel manual workhorse brewhouse as well as 8 fermentation and 2 bright beer tanks manufactured in the US from Oregon’s JV Northwest. The 120-bottle-per-minute packaging line comes from the well respected Italian experts at SBC/BC International. The new Shmaltz brewery will package 12 and 22 ounce bottles and kegs of their diverse core and seasonal favorites. The official, public grand opening bash will take place on Sunday, July 7, 2013.

Cowan recently appeared at the 2013 Craft Brewers Conference speaking about the transition from contract brewing to in house production as well as small batch brand strategies. He has also presented at the Great American Beer Festival, BevNet’s Brewbound conference, Beer Advocate’s Extreme Beer Festival, the Atlanta and the St. Louis Jewish Book Fairs, and the San Francisco and New York Jewish Museums.