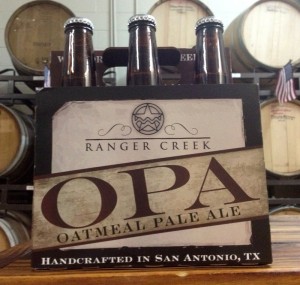 SAN ANTONIO, TX. — For the first time in more than a decade, a beer that was brewed in San Antonio is available for sale in 12 oz. bottles. Ranger Creek is picking up the torch from the late commercial San Antonio breweries of the past like Lone Star, Pearl, Yellow Rose, and Frio to release local, San Antonio beer in 6ÔÇÉpacks. Ranger Creek is a brewery that believes in community. It was this sense of community that led to a decision to use Kickstarter to help fund a 12 oz. bottling line in March. The bottling line made 6ÔÇÉpacks possible, and the brewery is releasing their flagship OPA as their first beer in the new packaging. The first 6ÔÇÉpacks will feature a commemorative carrier to say thanks to all their Kickstarter backers.

Ranger Creek’s Kickstarter campaign raised about 1/3 of the cost of the bottling line. The brewery funded the other 2/3. The commemorative carrier offers a special thanks to the approximately 200 Kickstarter backers and lists them by name on the bottom of the carrier. The first 5,000 OPA 6ÔÇÉpacks will have this commemorative design, then the brewery will switch to their permanent OPA 6ÔÇÉpack design.

Releasing 6ÔÇÉpacks is a huge milestone for Ranger Creek. It was part of their original vision when opening the brewery back in 2010, but a series of unforeseen delays prevented the release of 6ÔÇÉpacks until now. The new bottling line allows Ranger Creek to regularly offer the same beer on draft and in bottles, something that was impractical using their old bottling methods. While draft OPA will still be available at all the same bars and restaurants, now 12 oz. bottles can be found in grocery stores and liquor stores.

“Our initial release of OPA 6ÔÇÉpacks will be only in San Antonio,” explains Mark McDavid, cofounder of Ranger Creek. “We’re proud to be based in San Antonio, so we’re taking care of our home market first,” he continues. “Most of our Kickstarter backers and our biggest fans are in San Antonio, and these commemorative OPA 6ÔÇÉpacks are for them. Once we feel that San Antonio is taken care of, we’ll start expanding distribution to Austin, Houston, and Dallas/Ft. Worth.”

OPA was the natural candidate to be the first beer in 12 oz. bottles since it is Ranger Creek’s flagship beer and best seller. The Oatmeal Pale Ale is an American Pale Ale at heart that has new dimensions of flavor imparted by oats and a citrusy hop profile. While the brewery plans to keep their Small Batch Series releases in 375ml, waxÔÇÉdipped bottles, they will move their other beers into 12 oz. bottles. Mesquite Smoked Porter and La Bestia Aimable will be packaged into 4ÔÇÉpacks, and popular seasonals like the brewery’s Strawberry Milk Stout will also be bottled starting in 2014.

6ÔÇÉpacks of OPA will retail for between $8.29 and $8.49. The official commemorative OPA 6ÔÇÉ pack release celebration will be at Central Market on Saturday, Nov. 23. 6ÔÇÉpacks will also be available at Gabriel’s Superstore, HEB Alon Market, HEB 1604/Bandera, HEB 1604/Blanco, HEB 281/Evans, HEB Shertz, all four San Antonio area Specs stores, and WB Liquors Wurzbach/IÔÇÉ10. Photos of the carrier and bottles are available on Ranger Creek’s website at:

Ranger Creek Brewing & Distilling is a combined brewery/distillery handcrafting beer and bourbon in San Antonio, TX one batch at a time. They are the only microbrewery in San Antonio, one of a few combined brewery/distilleries in the U.S., and the only combined operation making both beer and bourbon. They focus on interesting recipes and use local ingredients from the state of Texas as much as possible. The company uses much of the same equipment to make both beer and bourbon, which is possible because in order to make bourbon, beer must be made first. They encourage visitors to San Antonio to sign up for one of their regularly scheduled tours and come by for a visit. For more information and interviews, contact Mark McDavid at 832ÔÇÉ969ÔÇÉ3800 or mark@drinkrangercreek.com.