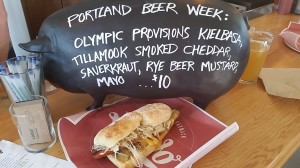 Portland, OR — Presented by Columbia Distributing and Pizza Schmizza – Portland Beer Week warmed up last weekend after kicking off on Thursday and now rolls into the first full week of events. If you have not been checking the calendar it has been updated with new events almost daily. Here are a few suggestions for what you should be looking out for in the next few days.

All three Lardo locations (Hawthorne, Williams, SW Washington) now have the official Portland Beer Week sandwich on their menu as well as the official beer on tap and the only outlet with our T-Shirts on sale!

Portland’s premiere bottleshop & taproom – Belmont Station is hosting a daily weekday tapping from a Randall that infuses beer out of the tap with special ingredients from coffee beans to cherries or bourbon soaked oak chips. Tappings happen Monday-Friday 5-7pm. Also on Saturday June 14th Belmont Station will be hosting Firestone Walker Brewing’s co-owner David Walker for a tasting of a rare flight of vintage Parabola 2011-2014 and bottle signing from 4-7pm. For Belmont Station’s full lineup of events: http://pdxbeerweek.com/tag/belmontstation/

Four Oregon breweries (Breakside, Lompoc, pFriem, and Upright), four secret sauces created by each brewery for dipping in one pound of mussels served with fries, and paired with their Belgian-inspired beer.

But there’s only one “Mussels from Brussels”. Will reigning champion Alex Ganum of Upright Brewing and his team prevail? You be the judge.

Seating will take place every 30 minutes between 5:30-8:30 PM on Tuesday, June 10. Awards ceremony will take place at 9 PM once all votes have been tallied. Limit of 10 persons per seating. Cost is $25 per person plus processing fees. Tickets here: https://www.eventbrite.com/e/mussels-from-brussels-tickets-11763546083

Come celebrate BikeBar’s 3rd Anniversary on N. Williams with $2.50 pints and 10% off merchandise all day. join us around 5:30 for a celebratory toast and birthday cake for everyone.

Travel Lane County is proud to announce the official launch date for the Eugene Ale Trail. Starting June 2, craft beer enthusiasts will have an easy way to explore Lane County’s robust craft beer scene. Meet many of the brewers of Eugene and try the beers: