SEATTLE, WA – Pike has recently added new stainless steel bright beer tanks, cylinder-conical fermenters, conditioning tanks, a state of the art glycol chiller and a high pressure steam keg filler, and a new gearbox and motor on our mash tun, all allowing us to increase production by approximately 30%.

Pike Head Brewer, Dean Mochizuki, reports that, “Our tanks are now full and we have, for the first time in the last few years, sufficient stock to supply orders.”

Pike Sales Manager, Steve Case, had advised distributors to sell Pike beers primarily to existing accounts until the increased capacity was realized. He is now advising, “Full steam ahead!”

Steve, a seasoned professional, joined the brewery in early 2011 and reports that the Pike brand is “on fire!” Dean, who has been with the brewery nine years, was promoted to head brewer in April 2011 and has witnessed a lot of changes at the brewery since the Finkel family re-acquired it five years ago. 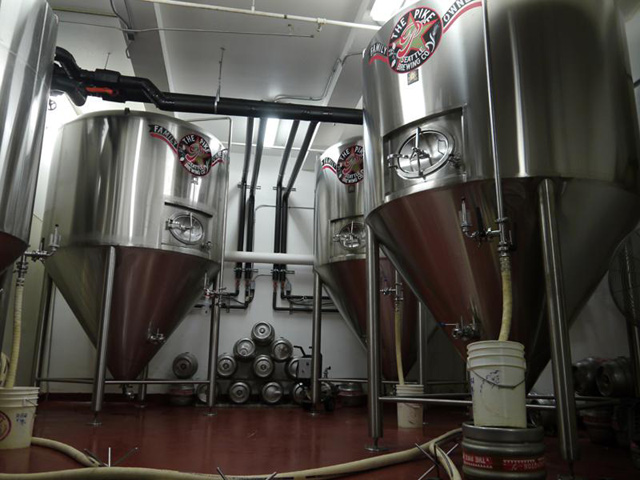 Pike is a gravity flow, steam brewery in the heart of Seattle’s Pike Place Market historical district. Pike was the brainchild of Charles Finkel, the founder of “Merchant du Vin.” Charles was the first to introduce a wide selection of brewing styles to the United States market; at the time, though it was the largest beer market in the world, there were only a few styles available. The Pike Brewery brews top fermented beers including Pike Pale, IPA, Double IPA, Naughty Nellie Golden, Dry Wit, Tandem Double, Monk’s Uncle Tripel, Old Bawdy Barley Wine, XXXXX Extra Stout, Auld Acquaintance, and others. Pike beers are distributed throughout the Pacific Northwest, and at select retailers around the country.

Because of Pike’s urban location, room to expand capacity is limited to the existing space. The original brewery on Western Avenue dates back to 1989 and is one-half block below the current brewery. When it opened, it was what would now be known as a ‘nano brewery,’ producing around 500 barrels of Pike’s top fermented ale per year. The company moved to its current location and added The Pike Pub in 1996; by the time Rose Ann and Charles Finkel sold Pike at the end of 1997, the brewery had experienced a ten-fold increase in production to around 5,000 barrels. In the ensuing years sales volume remained around the same level. 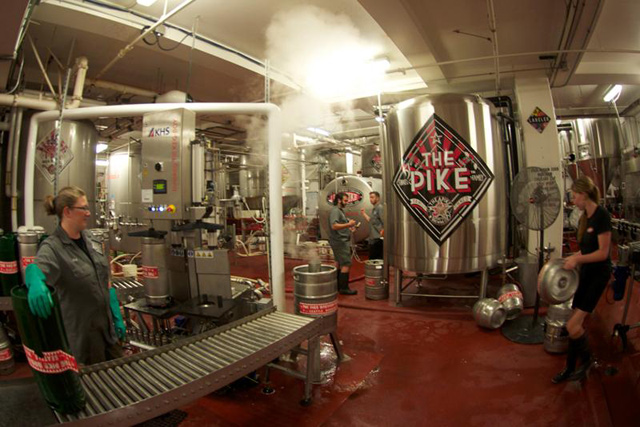 According to Charles Finkel, “people presumed that the brewery was maxed out on production and that there was no room to expand. We originally designed the brewery to produce around 18,000 barrels of beer.”

The expansion team was headed up by Pike Vice President and General Manager, Drew Gillespie. Drew reports, “We chose Newlands Systems of British Columbia to produce stainless steel tanks that are as beautiful as they are functional. Given the space restrictions, we had to trust that Newland’s could produce tanks to our minute specifications. Once delivered, Ballard Transfer of Seattle completed the installation. With less than an inch clearance in some areas, there were more than a few nervous moments; the tanks were raised into place and the team breathed a collective sigh of relief. The expanded glycol system was manufactured by Pro Refrigeration of Auburn WA and installed by Universal Refrigeration. KHS, a German firm, supplied the state of the art keg filler and conveyor system increasing our capacity to 30 kegs per hour. Seattle’s McKinstry Co, who originally built the brewery, replaced the aging mash tun gearbox and motor. When all the work was complete, the outside of Pike’s building got a beautiful new paint job befitting a world class brewery. Even with the expansion, Pike remains a small craft brewery. According to Charles and Rose Ann Finkel, “our sales growth is reliant on word of mouth, much of it from the thousands of people who visit the Pike Pub and tour the brewery annually. Our goal is not to be the biggest brewery, but rather, to be among the best breweries anywhere.”