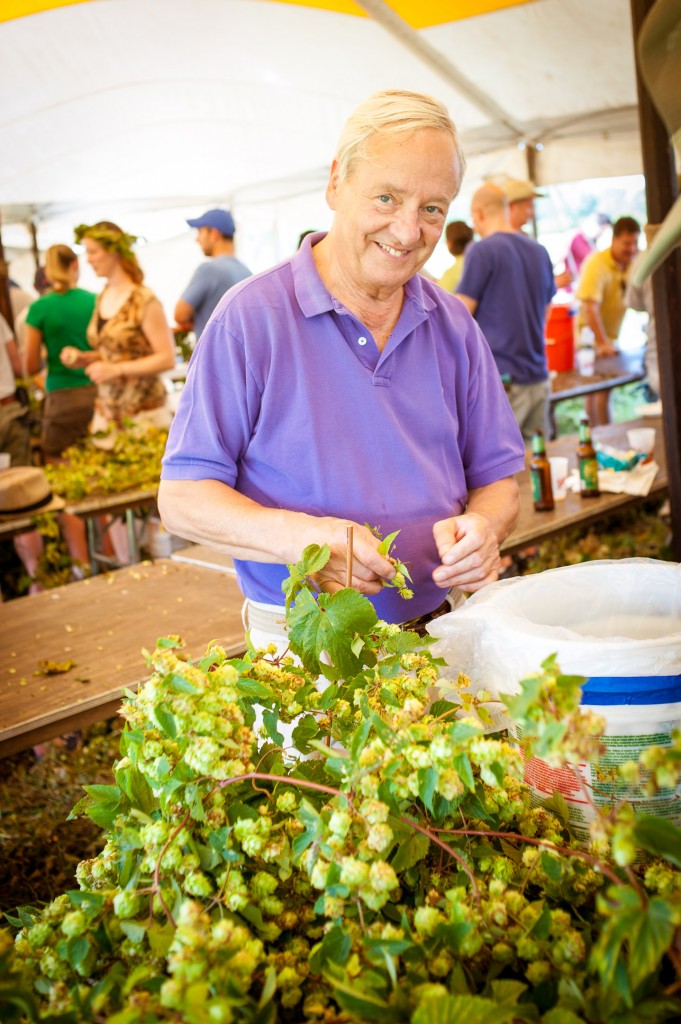 F.X. Matt Brewing Co. will continue 125th anniversary celebrations at the third annual Saranac Hop Harvest from 1 to 5 p.m. on Sunday, August 25 at Wrobel Farms in Bridgewater. This year’s hops will be used to brew the limited edition Farm to Tap – Fresh Hop IPA, the second beer in Saranac’s recently re-introduced High Peaks line, behind their recent release of Tramonay Vineyard Saison.

The “Fresh Hop” part of Farm to Tap – Fresh Hop IPA comes from the process. Traditionally hops are dried to preserve them for brewing beer, and as with any fresh product that is dried or preserved in some way, characteristics can be lost along the way. In a fresh hopped brew all that goodness is captured; some of the hops will be added immediately after they are picked and the rest will be dried naturally with no heat added. The hops will never be processed or bailed, and these gently treated hops will be added later in the process to dry-hop the beer. You’ll notice an excellent aroma with a dry, citrusy taste and fresh leafy greenness brought on by this unique process.

Hop Harvest began in 2011 as a way to celebrate history and help reinvigorate the New York State hop industry. From 1888 through the 1900s, the Matt family used local hop farms for ingredients to brew its famous award-winning beers.

“I can remember visiting farms every Sunday with my grandfather (and company founder), F.X. Matt, to pick out and buy the hops for the week,” said company CEO Nick Matt. “I have fond memories of the two of us out in hop fields – him showing me how to choose quality hops.”

One of these popular hop farms, originally owned by the Shaul Family, is still in existence today. Founded in the 1860s, this hop farm is currently owned by Jim Wrobel of Wrobel Farms.

“It has always been our goal to brew beer using as many local ingredients as possible,” said company President Fred Matt. “With these hops grown less than 20 miles from the brewery, we’re going to be able to continue to support yet another local business while brewing our beer.”

For several years, Jim tested different varieties of hops with hopes of expanding his crop enough to support the amount needed to make a Saranac brew. That hope came true in 2011 when Jim and F.X. Matt Brewing Co. hosted the first hop harvest using the bounty to brew Saranac Wet Hop IPA.

Since then, Jim has been working with Saranac Brewmaster, Jim Kuhr, to test out different varieties and increase the crop. Using a variety of hops, including local heirloom hops dating from 1872, a special batch of Saranac is made each year with the hops harvested at this event.

Registration for this year’s Saranac Hop Harvest is limited and available on a first come, first served basis. To register, visit saranac.com.