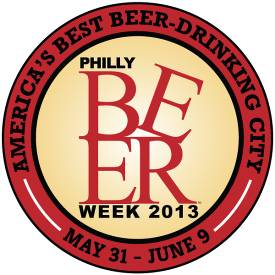 “First-time attendees and PBW veterans alike are encouraged to attend Opening Tap, to get a feel for what PBW is really all about,” says PBW Executive Director Don Russell. “It’s a lively start to the party, featuring great local brewers and restaurants, and it sets the tone for 10 days worth of beer and beer drinking.”

On Friday, May 31, Opening Tap ceremonies will commence at 7 p.m. with the traditional ‘first tap’ by Mayor Michael Nutter, held outside, on Independence Mall, adjacent to the Independence Visitor Center (1 North Independence Mall West.) The ceremony is free and those waiting to enter the main affair will be in prime position to watch the Philadelphia Inquirer’s Brew-vitational awards as well as see Mayor Nutter slinging the PBW keg mallet (affectionately known as the Hammer of Glory, or HOG) to release PBW’s first drops of Brotherly Suds 4, the local collaborative beer of PBW 2013.

Doors will open at 7:30 p.m. for a strolling beer tasting of more than 30 regional breweries on two levels. General admission costs $45 per person and will include a souvenir tasting glass. VIP tickets costs $90 per person and will include some of the region’s most unique beers from its very best breweries, a tasty food buffet and other surprises. Both tickets can be purchased online (click to buy). The event sold out last year, and tickets will not be available at the door.

Beer drinkers will get a first taste of Brotherly Suds 4, an English summer ale with a zesty citrus hop. The collaboration beer will be brewed this year at Yards by Tom Kehoe, Bill Covaleski of Victory, Gordon Grubb of Nodding Head, Mark Edelson of Iron Hill Brewery & Restaurant and Gene Muller of Flying Fish.

Beer friendly food will be available for purchase on site from Max & Me Catering. There will also be live music by The Flathead Gang. Attendees must be at least 21 years of age, and no children will be admitted. Those who will be acting as designated drivers can attend the Opening Tap for $15 per person, including complimentary soft drinks and a PBW DD t-shirt.

Guests who will be traveling into Philadelphia — or locals wishing to enjoy a PBW staycation — can access special deals and discounts through PBW’s website. Rooms are available for guests at the Hyatt Regency Philadelphia at Penn’s Landing (click to book), the official hotel of PBW 2013, located just two blocks from the Philly Beer Week Garden at Headhouse Square and a short walk to Old City and South Street, plus convenient access to public transportation. Rooms are also available with PBW rate discounts at the Embassy Suites Philadelphia — Center City (click to book).

Once again, PBW teamed up with Xomo Digital, Inc. to build an all-new app for this year’s celebration. New features include: New Layout and graphics; Event Listings searchable by brewery and participating breweries listed for each event; Improved Favorites; Social Media Links; and iPhone 5 compatibility. Apps are available for both iPhone and Android, and can be downloaded here (click to download).

For more information about Philly Beer Week, including the ever-expanding schedule of events both during PBW and throughout the year, a list of participants and other details, please visit www.phillybeerweek.org and follow them on Twitter and Instagram (@PhillyBeerWeek) (#PBW2013) and like them onFacebook.